I had hoped to go to bed at a reasonable time tonight, but here I am again at midnight. A short update on today: I am awesome.

I worked really hard today, in so many ways. The day started out with a business meeting, for which I got all dolled up (and the guys at work noticed, which was a definite plus). From there, I spent the morning revisiting the online outreach methods I’ve been employing to get the art competition my agency/gallery is sponsoring a little more notice, and I think it’s working. We seem to be pulling ahead in the polls as a host city (it’s a national contest, and the city that wins # of submissions gets an extra award in recognition of their work). Later in the afternoon we went to lunch as a company, and I was so good. I really wanted a burger, but instead I got a salad. Everyone else got crazy heavy meat dishes, and I ate my lettuce like a good girl. As a reward, after lunch I ate a sugar free dark chocolate truffle – a tiny, delicious treat that was the perfect mix of reward and restraint.

Following work, I went to yoga class, where I signed up to do a studio-wide 30 day challenge starting in September – that’s going to be awesome! Class was great, too, and I even started talking to a new girl who seems nice. Maybe I’ll have a new friend.

Dinner was a sensible veggie burger and a big ol’ kosher dill pickle on the side. I was under my calories for the day, but couldn’t fit another thing in; not even popcorn sounded appetizing. Now I’m very tired, and don’t know how I’ll do it, but really need to do my best to get up for an early yoga class. Tomorrow we’re filming a video at work, and I have no idea how long that’s going to take. I don’t want to have to miss out on exercise. I plan to be 156 by next week, so I can get my new Zaggora capris! 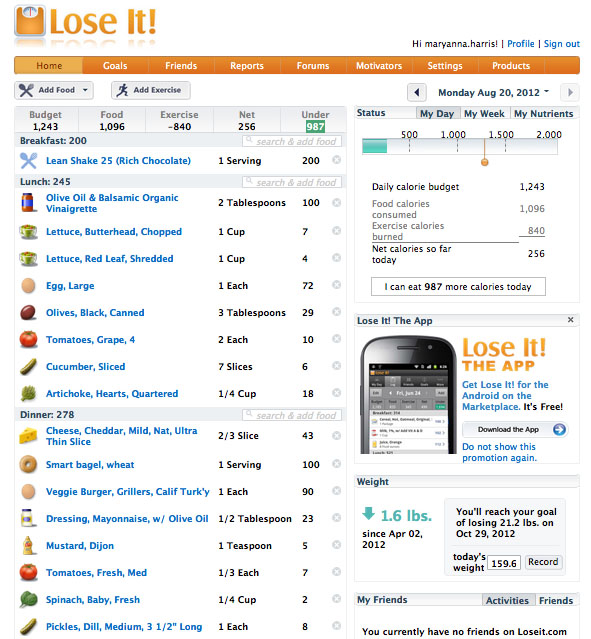