The day started out damp and gloomy. A fine mist was falling, and the sky was gray, as we struggled back out of the door of the inhospitable albergue and trudged back out to the Camino. I don’t know how Jakob slept, but I slept like a rock. That was great, because as it would turn out, I’d need all the energy I could get for the day ahead. Still, I was dragging as the day started. My mood was as dumpy as the weather.

The town still seemed to be asleep, but just up the road was a little cafe/bar that catered to the all night crowd. Most of the patrons were a little rough around the edges, guys who seemed to have just gotten off of the night shift, peppered with a few who had probably been drinking for hours. A pinball machine in the corner had a crowd of guys around it, bantering back and forth, cheering now and then. Several older men were perched at the bar, beers in hand. I mentally pegged them as off-duty truck drivers, and for some reason that cheered me up a little.

There were a few peregrinos already seated, eating the customary breakfast of toast, zumo, and cafe con leche. I took one look at their plates and decided I just couldn’t handle another morning of carb loading. I asked the bartender if she had tortilla, and she shook her head no. Eggs? No. OK, what about chorizo? Si! So I did have toast for breakfast, bolstered with a chewy hunk of sausage for protein, and a hot cocoa, just to get my endorphins going and pull me out of the funk. We sat near the other peregrinos, and ever-friendly Jakob made conversation while I ate and nodded along now and then. They were British women, in their late 50’s or early 60’s. In what I would learn was a pretty usual occurrence, they found my companion to be exceedingly charming, and one giggled like a schoolgirl while they talked. 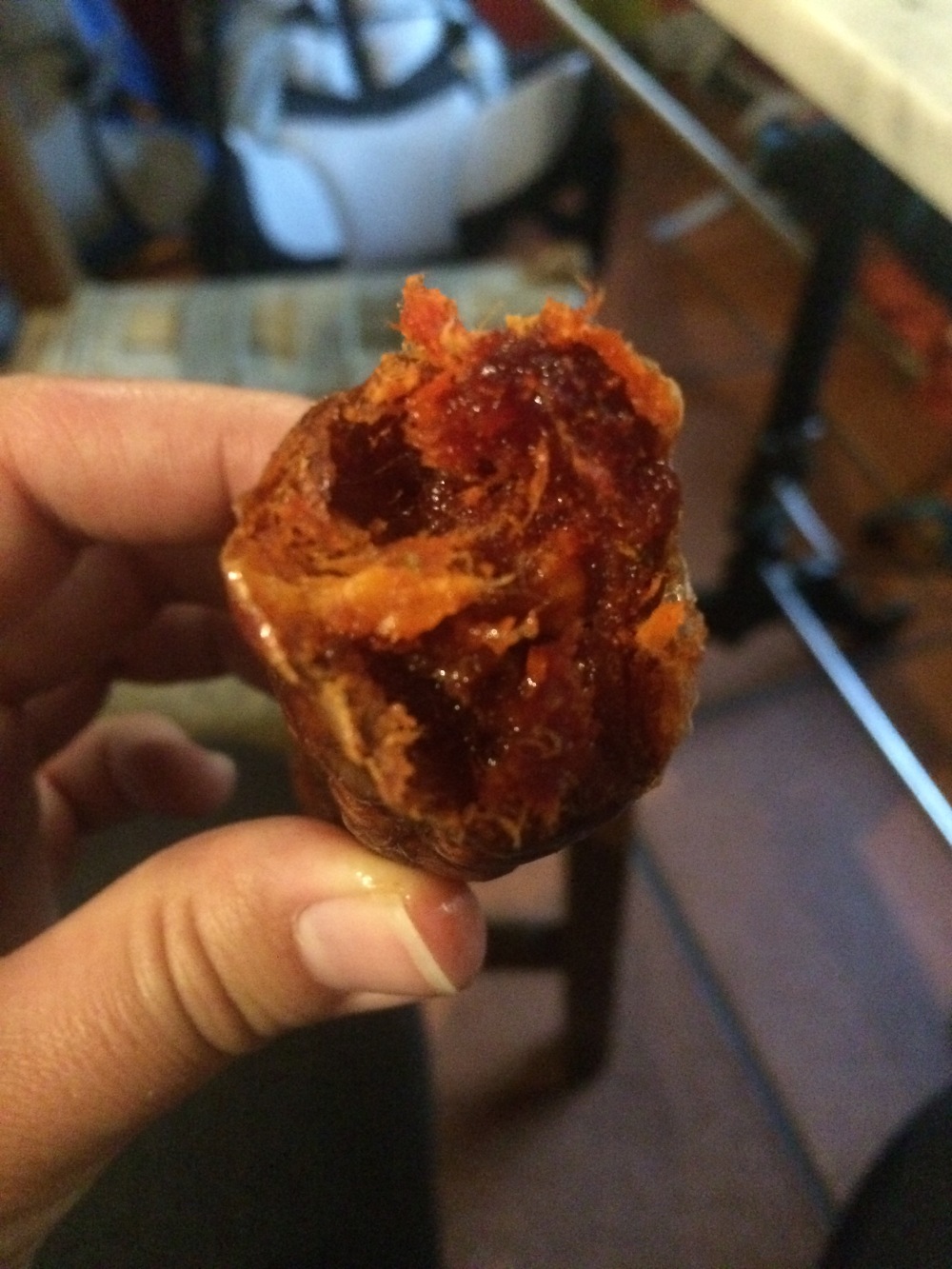 Eventually, there was a break in the rain, and the trio of women struggled away with packs and ponchos. I hadn’t quite finished my breakfast, so we sat a few minutes longer, and while we sat, it started to rain harder. Neither of us had the energy to budge until it cleared, so it was about 30 minutes later that we finally got our day started and got out of Fromista. Despite my breakfast and my new friend, I felt grayer than the day.

Before the Camino, walking was a means to get from one place to another. Walking just WAS. There was no emotion associated with it. There was no specific benefit to be gleaned from it. I put one foot in front of the other, repeatedly, until I reached a destination. That was that. I didn’t know before the Camino, and to be honest, I didn’t really realize while on the Camino, just what joy there was to be had through walking. I couldn’t see how drastically it could impact me, to my very core. This day stands as one of the first days that I got just a glimmer of an idea that putting one foot in front of the next could change EVERYTHING for me, starting with my mood.

As Jakob and I walked, I loosened up just a bit. I still felt emotionally low, but talking with my new friend gave me some mental space. The real turning point in the day was just up the road, about 9km away, at a place called Albergue Amanecer.

In my primary research for the Camino, I’d read that at some point around the Meseta, there was an albergue that had a friendly donkey and a tipi. I’m not sure when it became absolutely necessary for me to visit the albergue with the donkey and the tipi, but at some point, I’d decided that it was one of my Camino “musts.” I was hoping to stay the night in the tipi, should the opportunity present itself. The night before, while drinking wine and eating our grocery store dinner at the albergue, we’d researched the next day’s walk a little, and discovered that we were an hour and a half’s walk from Albergue Amanacer, home of tipi and donkey. I was disappointed to not be able to stay the night, but figured we could at least stop and take a look.

By the time we reached the tiny municipality of Villarmentero de Campos, it was already late morning. We were very behind schedule for the day, and the Albergue Amanecer’s front gate was closed. But beyond the gate was visible a large, verdant lawn, outdoor tables, and in the distance, the tipi and several old fashioned wooden structures that reminded me of Romani vardos that had been taken off of their wheels. The entire picture was so wholesome and pleasant that it increased my resolve to get in and explore. Jakob tried the gate, and it opened easily. Once in the front yard, it was obvious that it had been closed to prevent the yard’s various fowl – chickens, ducks, and geese – from wandering out. The birds wandered around and past us as we made our way to the little cafe on the side of the building. Inside, one of the owners made cafe con leches and invited us to hang out while we rested our feet. 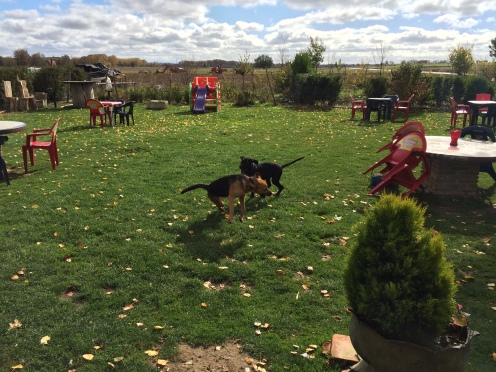 As soon as we’d taken a seat outside in the garden, a couple of locals showed up. With them came their dogs, who scampered around, played with each other, chased chickens, and generally just amused the hell out of all of us. At one point, one of the chickens flew up to the roof to escape a dog, and we all clapped in amazement as the chunky bird clumsily cleared the roof’s edge by what seemed like millimeters. As we enjoyed the scene, a young hospitalera told us about how she had recently moved to Spain, soon after walking the Camino for the first time. On her first walk, she’d rescued Camina, one of the young dogs now playing out in the yard in front of us. She felt so at peace on her journey that soon after returning to her own country, she called up the albergue’s owners, asked if they’d hire her on, then packed up her belongings and moved to Spain.

I was aware that it was getting late, but was really enjoying the moment, and didn’t feel like leaving yet. Part of me felt anxious – was I inconveniencing my new friend? Would he need to walk on to meet his schedule? Was it pissing him off that I was wasting time here in this beautiful garden? But when I surreptitiously glanced over and took stock of his attitude, I saw that he was relaxed, just taking in the moment with a zen-like demeanor that made me a little jealous, but mostly just made me relieved. I knew that I was being given a big gift, whether or not Jakob realized it. To be able to move at my own pace without judgement was still a very foreign concept. I decided to sit back and soak in this taste of freedom that had presented itself, here in this perfect little slice of nature.