It was still dark the next morning when Natalie, Ruth, and I left the albergue to begin the day’s trek. We started the day with the routine pitiful breakfast that was the norm across the length of the Camino – toast, juice, coffee – and between the vague irritation from not enough protein, the biting cold morning, and being generally exhausted, starting the day’s walk was quite difficult. There was also the not-so-little issue that this would be my last day with Natalie for some time. I greedily soaked up every second of our walk together, endeavoring to regulate my pace so I could cling to her side for the few hours it took to walk from tiny hamlet of Cardenuela Riopico to the big city of Burgos.

No matter which way one enters any large city, you’ll still find yourself humping it through the ‘burbs for quite some time before reaching city center. In Burgos, it’s no different. The “industrial area” – office parks, some scrapyard areas, a place that felt like the disused back lot of a small airport – that you’d drive through in less than five minutes takes more than an hour to conquer on foot. It’s not pretty, it gets monotonous, but if pilgrimage is life in a microcosm, I don’t think I need to spell out for you why it might be helpful to endure the boring, ugly bits. That’s up to the individual, though – every pilgrim walks her own road. My lessons are not yours. I found a strange joy, even in the not-so-great stretches, something I think has its roots in a childhood spent playing on the railroad tracks and in abandoned houses. I’ve always loved the overgrown and forgotten, the underdog places. They suit my soul.

Two days before, at dinner with Natalie and Terry in Villafranca Montes de Oca, we had spent some time discussing the pros and cons of the route into Burgos. Terry had very strong views on the subject, having done it before. She’d found the route spiritually deflating on her last trip, and advised against walking there. That’s part of why she’d taken the bus from Villafranca. Natalie, who’d also walked this portion of the route before, had heard that there was an alternate way to get into Burgos that was much prettier, and had resolved to find it. I was happy to tag along on the search. As it turns out, the way was quite interesting, in turns ugly and beautiful. There were still industrial areas to slog through, but then the route took us through a beautiful natural area that turned into a city park, first with nature trails, then bike trails and foot paths.

All morning long, we saw Ruth, then lost her, then saw her again. Finally, about 30 minutes before reaching city center, Natalie and I plopped down on a park bench to eat a snack, and Ruth came along just as we were finishing up. It was nice to join up and walk the final stretch together; I took the opportunity to ask Ruth about the many hiking badges on her backpack. She had at least 10 patches, maybe more, denoting the various places she’d hiked. I loved the idea, and still do.

Our path through the park followed a small river, and as we got further into town, there were more and more foot bridges crossing the river. We could have crossed a bridge and left the park at any time, but kept moving along, scanning the sky for the spires of Burgos Cathedral. Twice we stopped to ask directions, but both locals told us to keep walking, not to cross any bridges yet. The last gentleman we talked to was so emphatic that we HAD to stay in the park for awhile, so we were careful not to stray. At first it seemed like he’d been afraid we’d get lost, but once we got into town proper, we realized that he’d had a different purpose in mind. Though we could have followed the river on either side of the city, entering city center from the path we were currently on gave us an absolutely breathtaking view of the gates of the old town, the spires of the cathedral just beyond. We’d lucked into asking a proud local for directions, and he pointed us in the precise direction required to fall in love with the city the way he had. It was the first time, but not the last, that I’d find myself close to tears over the sheer beauty of a place. I don’t think that I could have had quite the same experience had I not walked so far to get there. It was a triumph unlike anything I’d yet felt on the Camino, thus in my life.

We arrived early enough in the day for the other two ladies to get to tour the cathedral and grab food before leaving town. Since I was checking into a hotel, I offered my room for baggage storage, so everyone could change shoes and walk around Burgos without packs. The Meson del Cid is a fine, old hotel that fit my needs. It wasn’t the most modern or cushy, but I had my own room with a giant bed, no snoring neighbors, and a fabulous bathroom all to myself. Even better, the hotel is directly beside the cathedral, which is situated in the city’s main square, so I was right in the middle of all the action. When your feet and legs are screaming with every step, not having to walk too far is worth its weight in comfortable walking shoes. We all took a second to admire the generous accommodations, then headed out to take a peek at the town.

First stop was a walk around the cathedral and surrounding neighborhood, where we happened across the most adorable little cafe any of us had yet seen. It was a tea/cocktail shop that was decorated in a very feminine motif, pastels and floral patterns, with beautifully appointed china. Even the barista had a sweet smile and very welcoming demeanor, fitting the overall spirit of the place; the entire experience was enchanting. They also had one of the best slices of tortilla of my entire Camino, with a thin layer of ham baked in between a thick layer of egg/potato, and a thinner layer of egg/cheese.

After a cafe con leche and a little snack, it was time to tackle the cathedral. There are no words to properly explain the awe I experienced, so I’ll just give you photos… 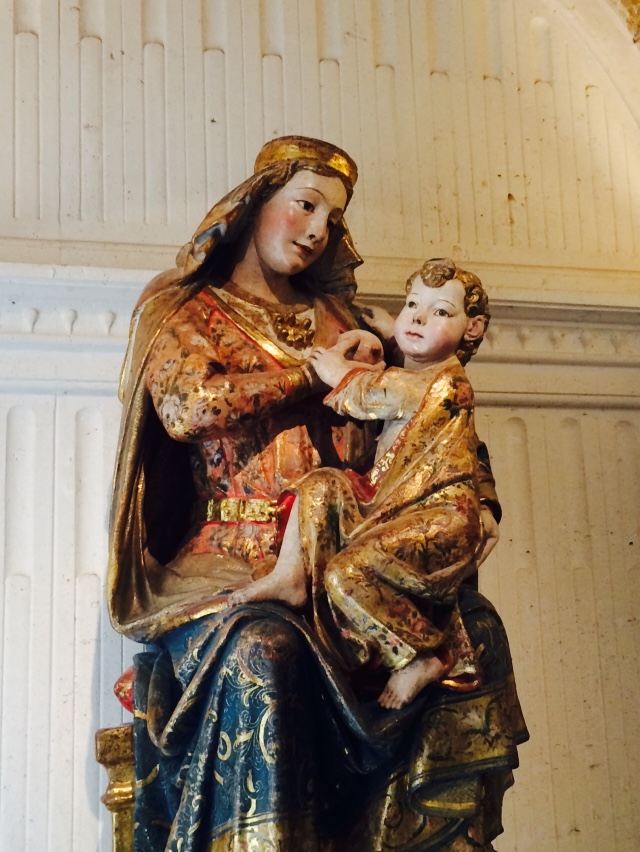 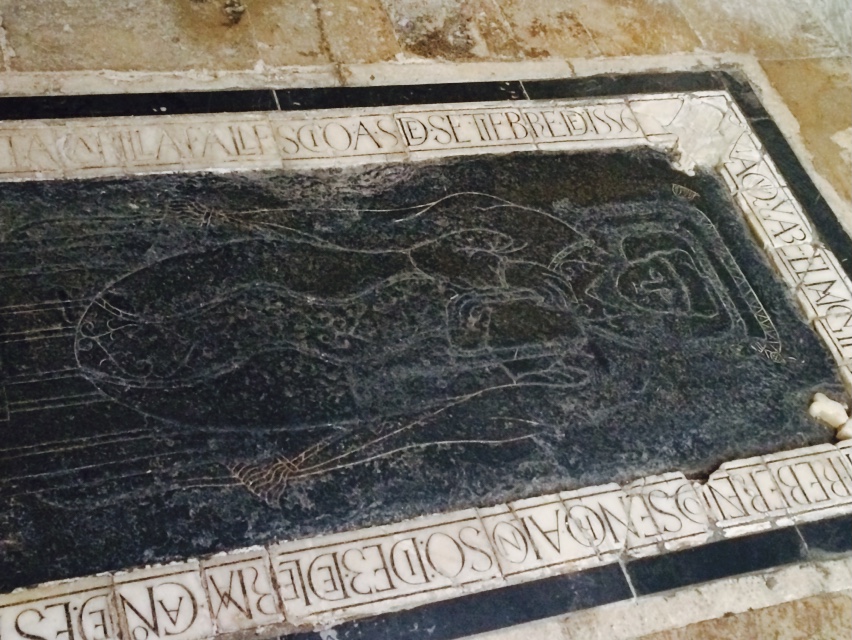 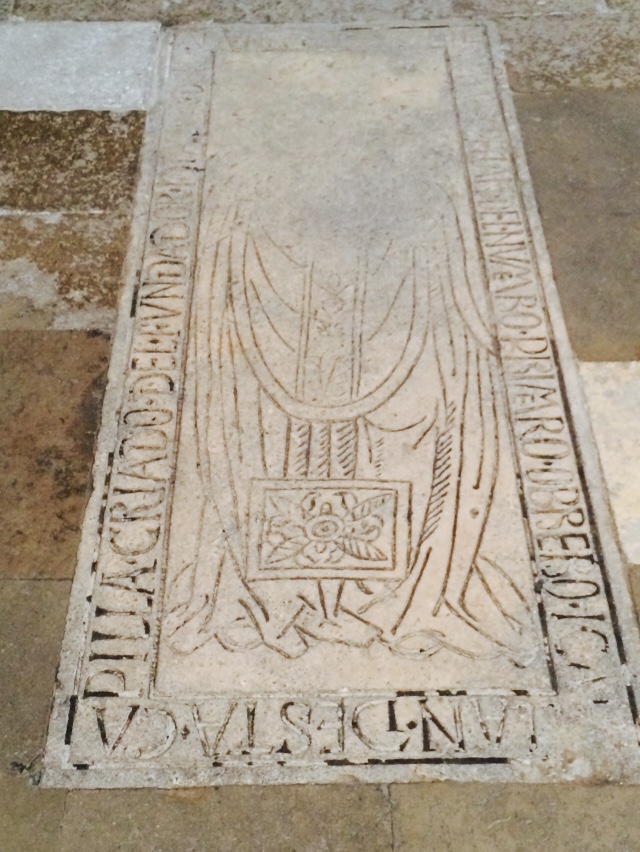 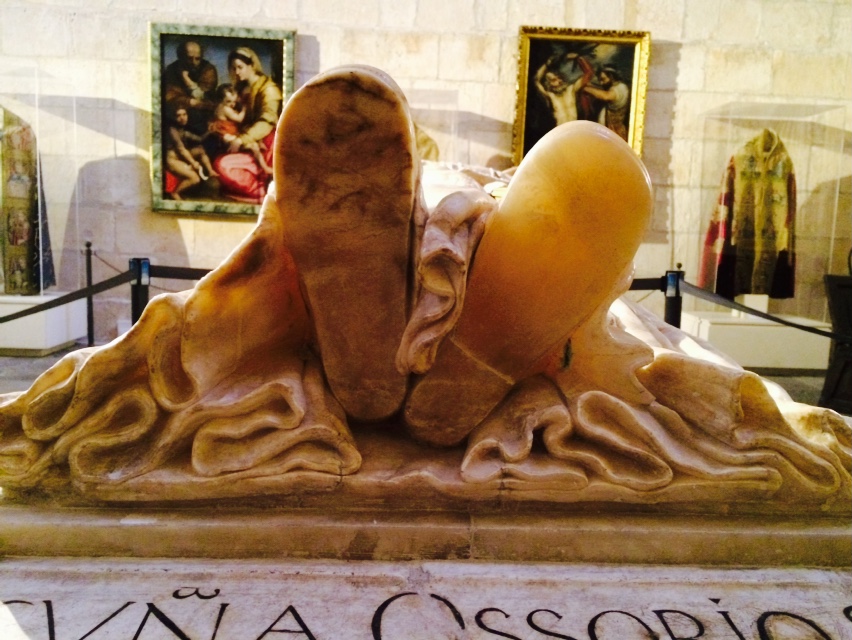 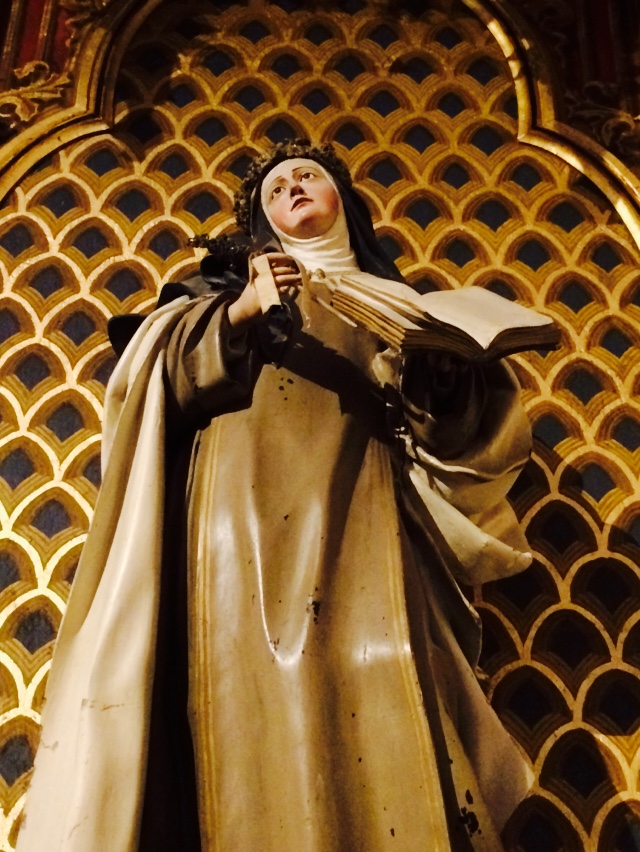 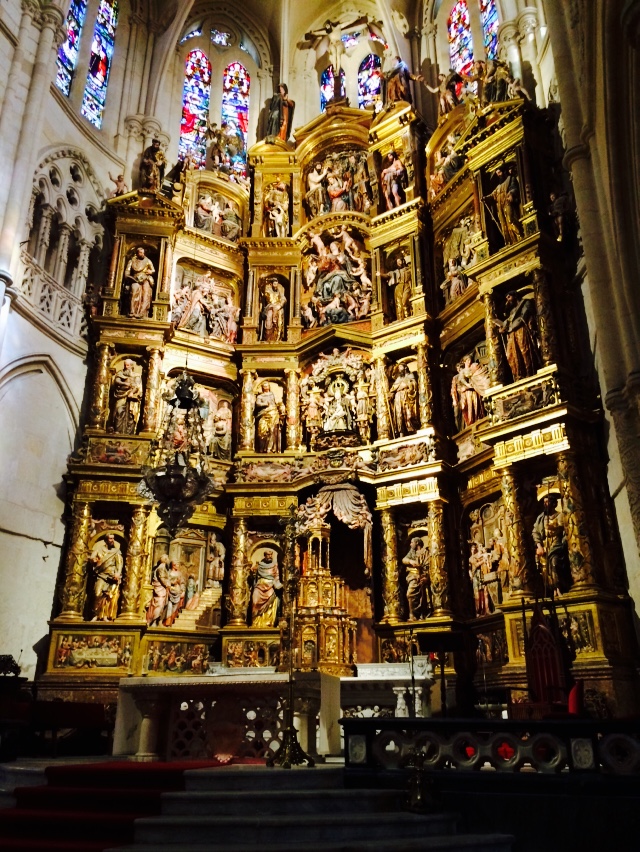 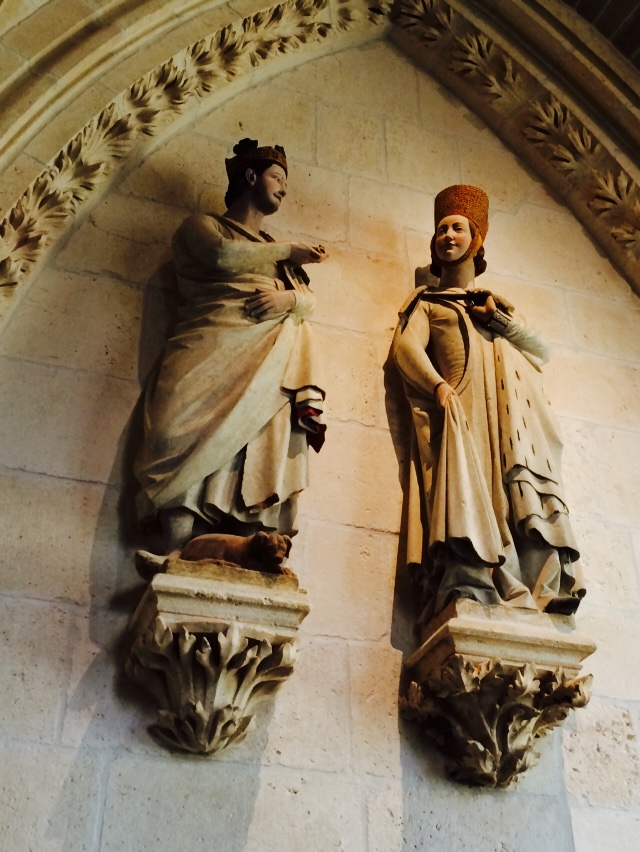 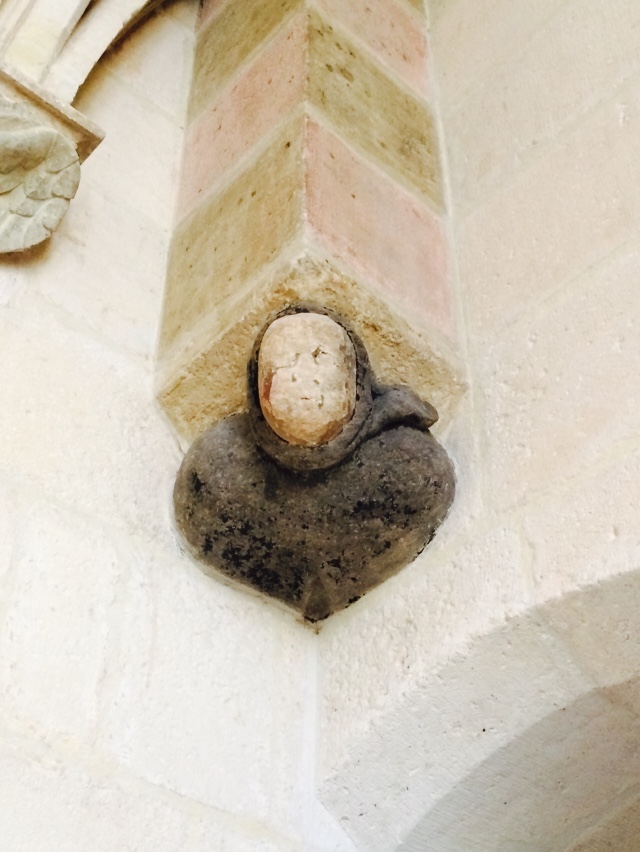 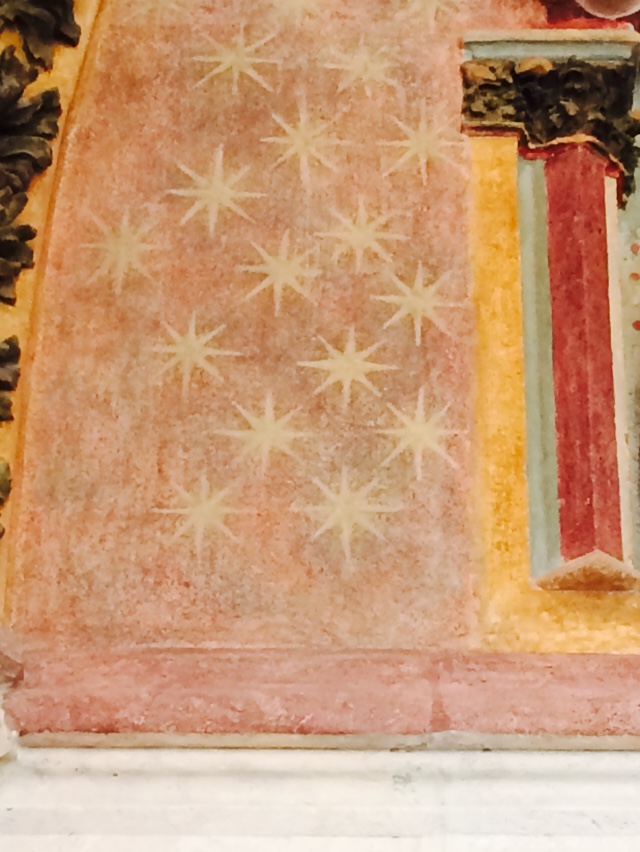 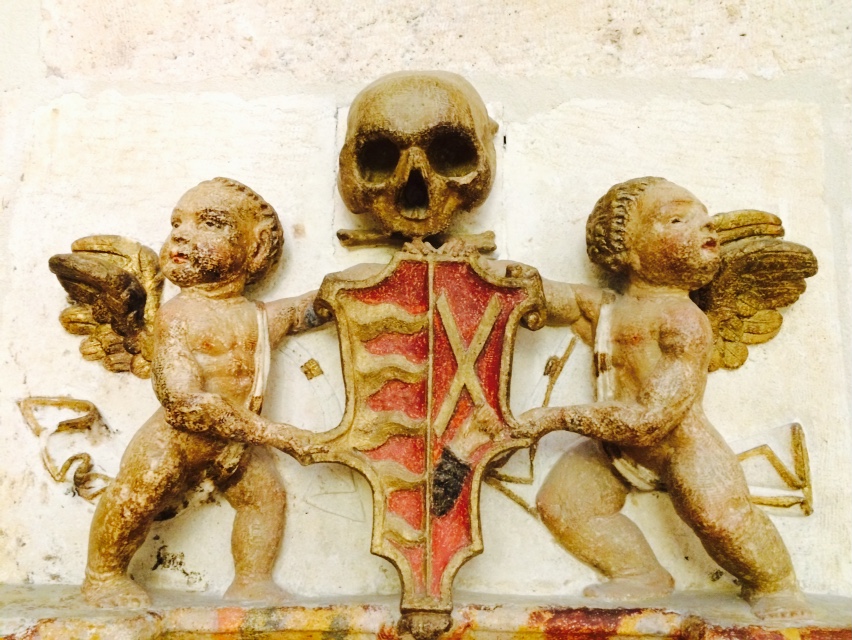 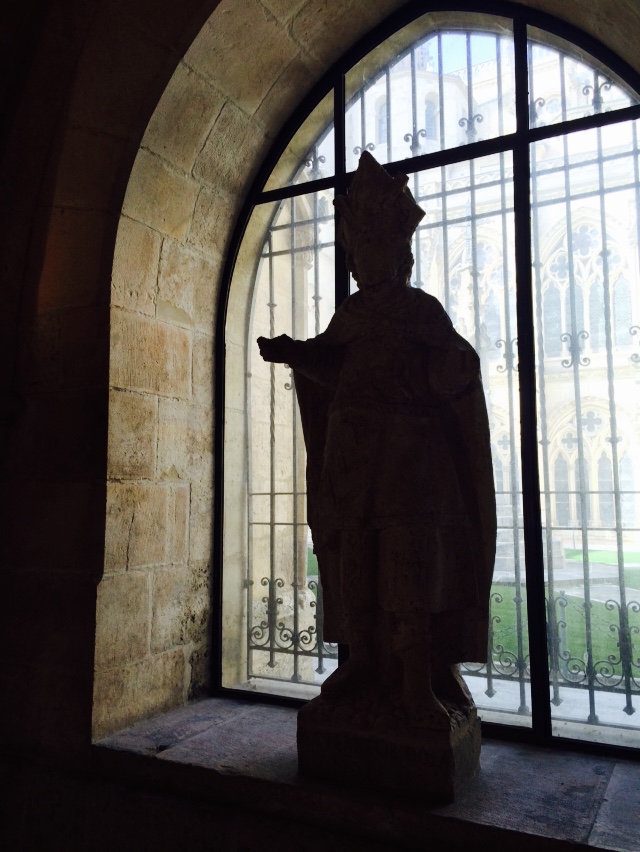 I quickly lost the other two peregrinas, as I soaked in every tiny detail and read every available scrap of info that I could find. By the time I finished the self-guided tour through the church, Natalie and Ruth were long-finished and sitting, waiting for me near the exit. I could tell they were a little impatient to get back on the road again, but they were also both so forgiving and kind in their manner that I felt guilty and forgave myself in almost the same moment. We went in search of kebabs, as one of the two ladies had heard there was a really good kebab shop right around the cathedral. The one that we found was OK, but nothing to write home about. After lunch, it was time for them to walk on. It was already mid-afternoon, and they had a long walk to get out of the city. We went back to my room to get their bags and have an emotional goodbye. I promised to catch back up with Natalie in a day or two. Maybe I believed at the time that that was a possibility; I don’t know.

That night after dark, I walked around the city center, exploring on my own for the first time. One thing that struck me about Burgos, and many of the smaller towns I walked through that had even a smidgen of night life at town center, was how families were out together en masse. In a U.S. city at night, you’ll see couples out together, or maybe groups of people if they’re headed out to eat or to a club. You might even see a family or two, or a single mom/dad with kid or kids. And the same was true here, of course – except that there were many children present, and kids were normally accompanied by both parents, or two grandparents, or parents AND grandparents. The kids were always dressed so nicely, and it was rare to see any little ones acting up (at least in public). The whole scene was completely alien to me, but heartwarming, too.

I went looking for a place to eat dinner, but felt so out of my element without a friend. I wandered down a bustling strip and through a couple of squares, admiring various menus and shyly standing around, getting a feel for how fancy the establishments might be. Several restaurants had ads for chocolate and churros, which I craved to try. In the end, though, I was just too out of my element to force myself into dining alone in a foreign language. I walked around until I found a little grocery store that was still open, and bought a selection of junk food to eat in my hotel room. I took a long, luxurious bath, then curled up in bed and ate chips and a chocolate bar, letting the crumbs fall as they pleased with no one there to judge me.

It felt strange to be so solitary. For the first time in a long time, being alone, something that I enjoyed in my “real life” back at home, filled me with an acute sense of loneliness. Looking back on that memory brings to mind the old spiritual, “Sometimes I Feel Like A Motherless Child.” I was hurting on the inside that night. I never did get to try chocolate and churros. I also didn’t sleep at a hotel again on my Camino, and even now, I tend to stay in hostels, where I can meet new people. Seventeen days in, and my way of encountering the world was changing.