The walk from Pamplona to Puente la Reina was one of the most exhausting I’d yet to experience, but the road offered its own rewards that day. I’ve already mentioned my brightest memories from leaving Pamplona in my last Camino blog entry, but there’s one more I’d like to recount, just to keep it fresh. The night before we left, the three of us girls went upstairs to the albergue’s communal kitchen and pooled our resources to have wine and snacks. While we ate and chatted, I filled out 30 postcards to mail back home, and since Claire also had some things to mail, we decided to try to find the post office on the way out of town in the morning. In the morning, we wandered around a little bit as we tried to find the post office, and one of our wrong turns led us to a little square with a statue of St. Francis and the Wolf of Gubbio. I took it as a sign, and as it turned out, it was to be the first of many that day. 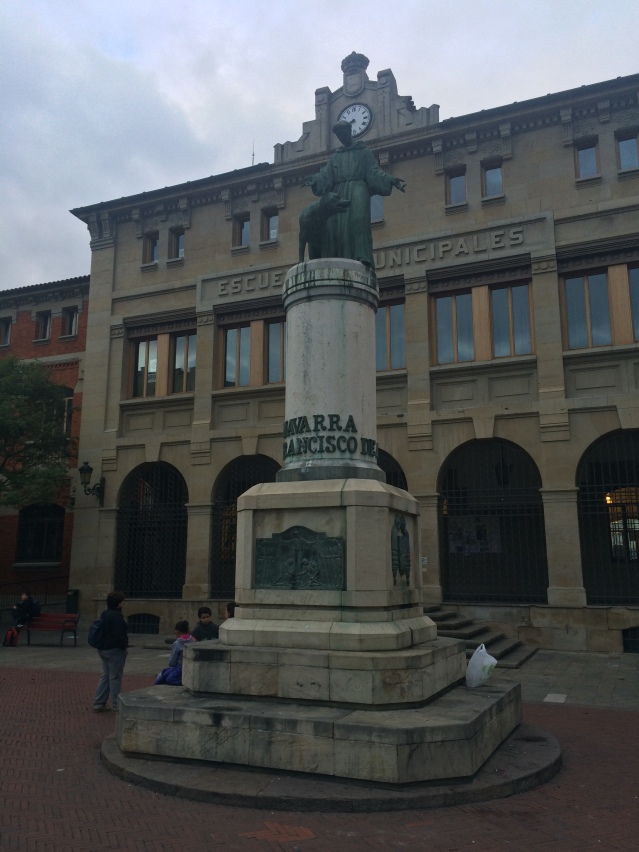 After visiting the post office successfully, we followed the yellow arrows back to the Camino. On our way out of town, we made a brief stop at the Church of San Cernin (click to learn more), a lovely 13th-century church possibly built over an old Roman temple. I was particularly taken with the church’s wooden floors, but still haven’t done the research to find out the reasoning behind the numbers. At the time, I assumed that the numbers coincided with tombs, but perhaps an expert can enlighten me in the comments! 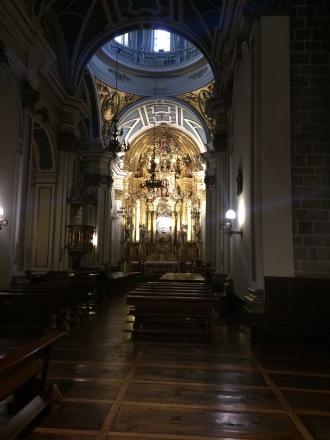 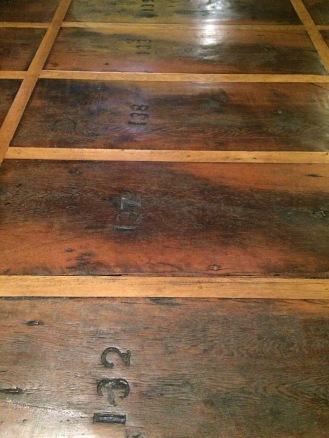 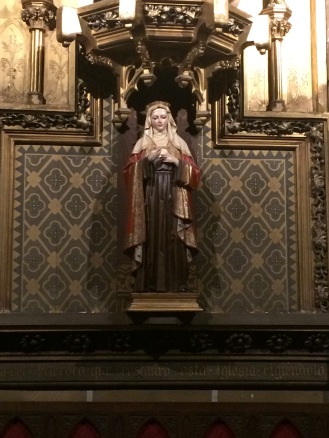 As I recounted in the last entry, we stopped for coffee and a quick trip to the farmicia, then finally headed out of town a little later than planned. From Pamplona, the Camino takes pilgrims through a number of small towns, including Cizur Menur, where Natalie had memories from her earlier Camino of a wonderful hospitalera who was a foot expert. We had tentative plans to try to find the lady, just to say hi, but it didn’t work out. Instead, we kept walking, following the road uphill to the famous Alto de Perdon, “The Mount of Forgiveness.” 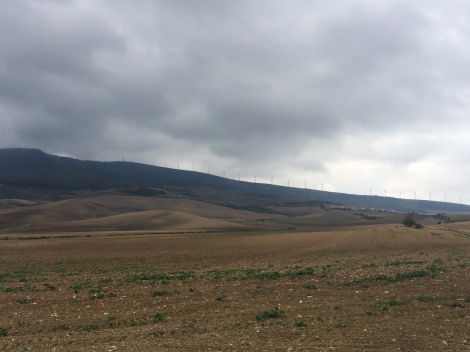 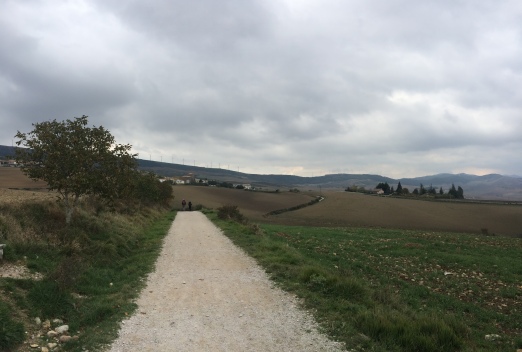 As we neared Alto de Perdon, even though we were walking up into the hills again, the landscape sort of stretched out all around us. The city had fallen away, and again it was easy to get lost in the greens and grays of the surrounding landscape. There were windmills everywhere! There had been a little rain to begin with in the morning, but as we climbed uphill, the wind began to whip, and the day started to get a little more gray than before.

I pulled the hood of my rain jacket tighter around my ears, and kept a close eye on my footing as we climbed up toward the famous metal statue that crowned the highest elevation of the day’s walk. Natalie walked ahead, and Claire was quite some way behind, and for some reason, I decided to just stop and look around. Ever since seeing Francis that morning, I’d had this feeling that I was missing something, but I couldn’t quite figure out what. Then I saw something I’d been looking for for days – my first poppies of the Camino. Ever since starting out, I’d kept an eye out for my favorite flowers, hoping to catch at least a couple of them in bloom, even though it was late in the season. Up until this point, I’d seen tons of crocuses, but not a single gorgeous red bloom. They’ve been important to me ever since visiting Assisi, Francis’ birthplace, and seeing them here, on this day, seemed particularly important. 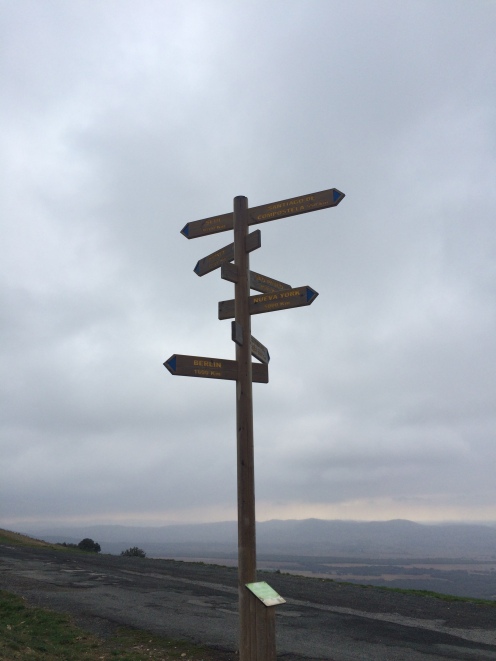 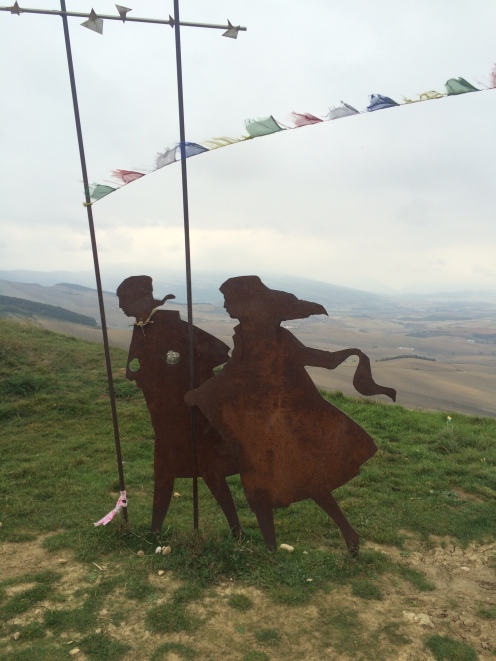 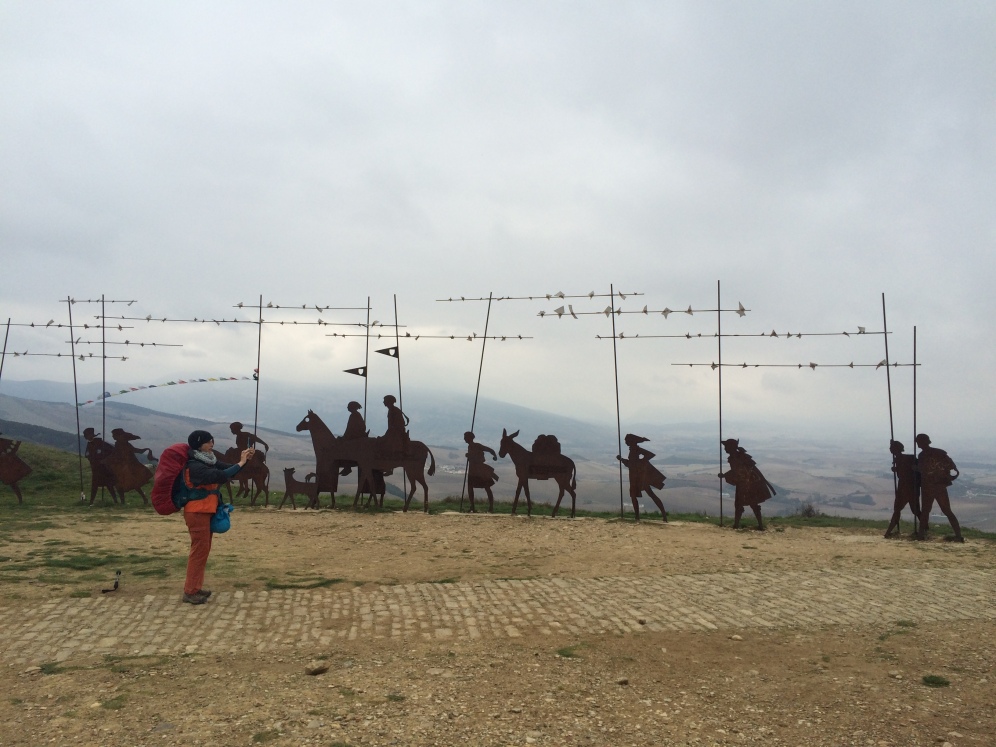 Ever since seeing Alto de Perdon in the movie The Way, I’d expected it to be a very special and inspiring place, but in reality, the popular site wasn’t everything that I’d expected. Even at the time, it took a distant backseat to the poppies I’d seen just a few minutes earlier, and the rest of my walk that day was so beautiful and weird that afterwards, the hilltop sculpture was just a blip on my mental screen.

Walking downhill was a huge challenge for me that day. The ground was a little slick, but even worse, this portion of the Camino was just loose rocks. My knees were protesting the downhill climb, and I slipped often enough to start to be very nervous about the rocks. Natalie was much faster at this than I, so there ended up being at least a half-mile between us, maybe more. Claire and I passed each other throughout the afternoon, but for a good portion of the rest of the walk, I felt pretty isolated by the landscape. There were other pilgrims, but I don’t remember them. Mostly, I remember relishing the freedom, and singing at the top of my lungs for much of the afternoon. 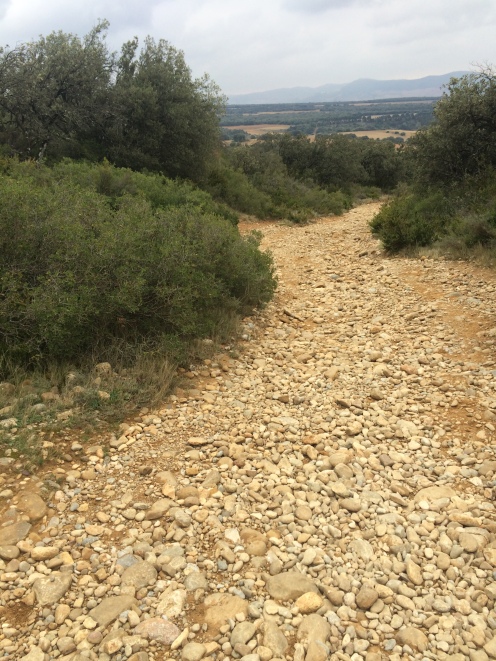 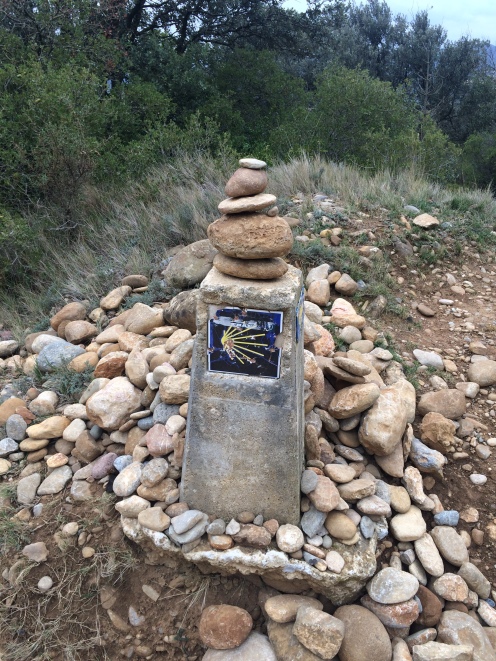 In Uterga, I caught up with Natalie at a great little albergue called the Albergue Camino del Perdon, where we had a seat, took off our shoes, and shared some food. We had a beautiful bowl of soup, and I ate one of my favorite slices of tortilla along the entire Camino. A sweet, well-loved neighbor dog came over to see if we needed any help clearing our plates. 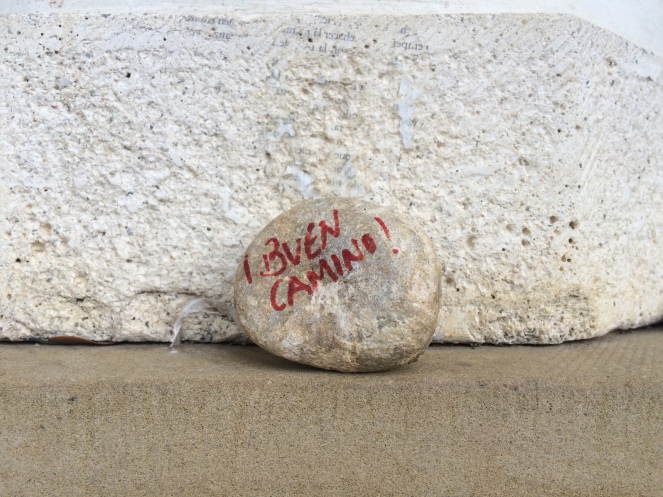 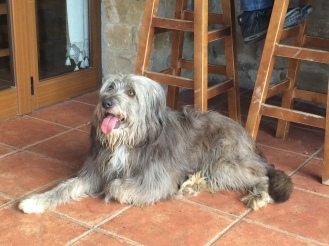 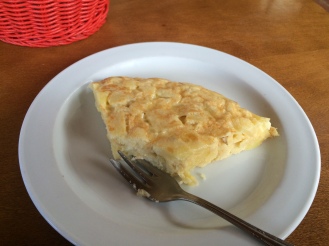 Eventually, Claire ambled up, and we enjoyed sitting a little while longer. It was getting late, though, and we still had a ways to walk to get to Puente la Reina. The rest of the afternoon passed in a bit of a blur; my legs and feet were really starting to feel the strain of the day, and I got slower and slower as we walked through Muruzabal, then Obanos. At one point, I was right behind the girls, walking a suburban neighborhood. As we walked by house after house, they chatted ahead of me, and I just walked with my thoughts about 10 feet behind.

Suddenly, I heard an insistent whinny come from over a fence, and a beautiful white horse stuck her head out in my path. My companions kept walking on, immersed in their conversation. This gorgeous horse and I spent a good ten minutes communing over the fence, putting our foreheads together, me giving her ear scratches, her giving me little snuffles along my forehead. It was a beautiful little stretch of time, and if I could have visited for longer, I surely would have. But I didn’t know where I was supposed to meet up with the girls, so it was important to hurry on after awhile. It felt like a magical moment, though, and just another sign that Francis was walking beside me that day. Later, I asked the girls why they hadn’t stopped to say hi to the horse. “What horse?” they asked. Weird.

By the time we made it to Puente la Reina, it was already late afternoon. Luckily, we were just ahead of the last wave of pilgrims for the day, so there were still some open beds at the municipal albergue. I was so worn out! I barely had the energy to shuffle in the front door, then let Natalie and Claire talk with the hospitalero to see if there was any more room. I didn’t want to sit, in case I couldn’t manage to stand back up again, so I leaned against my pack, against the wall, and half-heartedly struggled to untie my shoes until it was my turn to show my ID and pay the guy. I believe it was five euros for a bed.

The albergue was pretty bare bones, with the same crappy metal bunk beds that they’d had at Zubiri, except that this time, it seemed like the bunk beds had been made for little kids, since there was barely enough room to sit up when you were on the bottom bunk. I didn’t really care, though. I was excited to have a bottom bunk, and once the late pilgrims came in, I was even more excited to just have gotten a bed. A few people were given sleeping mats to crash on the floor. One of the funny things that I remember from that particular albergue is that there was a group of pilgrims from Israel, all old men who played in an orchestra together, and spent the night bantering and telling jokes. They ended up irritating Claire the next day with their insistence that she stop walking and take their picture, but for the time being, they were an entertaining bunch.

After we’d showered, washed clothes, and had everything hanging out to dry (with not much hope in that department, since it had been a humid day, and promised to drizzle overnight), we decided to explore the town a little, and find something to eat. I don’t remember if we found a decent pilgrim meal or not, but I do remember how family-oriented the town was. It was the first of many towns that would impress me with how beloved, well-dressed, and well-behaved the children were, and how the family units all came out to eat and socialize together, mother, father and kids, or grandparents and kids. I didn’t take any pictures of the little ones, since that would be creepy, but I did take a couple of shots of the girls and myself on our way into town.