As I mentioned a couple of posts back, I got my first book of fairy tales as a very young girl. My father is really into books, as am I, and when I was a kid, our house even had its own library. The shelves were floor to ceiling, corner to corner on two walls, and there were still so many extra books that we had stacks and stacks in the center of the room and on the desk and in boxes all around the room. I don’t know if I’ve ever mentioned that my parents are collectors who can’t stop collecting. I grew up surrounded by boxes of treasures gleaned from weekly yard sale & auction trips. It made (and still makes) for great exploring. There’s not much better than getting a big cardboard box full of mysteries – especially when they’re all leatherbound.

Anyway, after that first book of fairy tales came many more. I read all kinds of things when I was growing up, but fairy tales remained my favorite books to find and hold onto. I especially liked anything with out of the ordinary illustrations, like the set of books my great uncle sent that featured photographs of elaborate fairytale sets, with slightly-fuzzy felt dolls playing the characters. In college, during one of my art history courses, we briefly discussed the 3-color process used in printing color illustrations for books, especially – you guessed it – for late 19th & early 20th century fairy tale books. Not long after, I took a class that focused solely on fairy tales throughout history. I was in heaven. One of our assignments was to pick a fairy tale illustration that told a story particularly well.

That assignment deeply impacted my life, and gave me my first major taste of what it means to be a collector, too.

My favorite fairy tale is Bluebeard, in all of its many incarnations, but I couldn’t find an illustration that really suited the story AND my taste. While searching the internet, which was then still pretty new as far as school research went (I know, it’s crazy, right?), I ran across another “blue” fairy tale image that just blew me away.

This is Scheherazade, an illustration from The Arabian Nights, by artist Kay Nielsen. It was never published in conjunction with the book, but only later, in its own collection after his death. I first saw his work in a beautiful hardbound copy of In Powder and Crinoline, a gift from my Grandma & Grandpa, my mother’s parents, at some point in junior high. You might notice that this style of illustration is different from more typical fairy tale illustrations of the time. For comparison, here are illustrations by two of my other favorite illustrators, Edmund Dulac:

And here’s an image from Bluebeard by Arthur Rackham (famous for illustrating the classic, The Wind In The Willows): 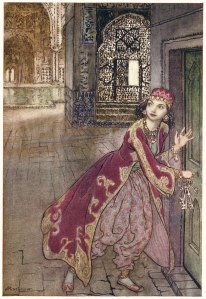 Rackham’s heroine, about to discover something deliciously terrible…

After discovering Nielsen’s illustrations online, I needed to find out more. That one image was a springboard for me, but not necessarily where you’d expect. Though I love his work, what really captured my imagination was the fact that a character or story could be “told” again through images. I had already understood the concept that a folk story or fairy tale might be changed slightly with each retelling, but in examining the illustrations from The Arabian Nights, I grew to understand that the inferences they made could vary just as wildly.

Over the last 10 years I’ve come to own about 40 copies of The Arabian Nights and related books, including very early copies with crumbling covers and no illustrations, all the way to mid-century children’s picture books. In some books, the characters all wear turbans and pointy shoes. In some they’re blond-haired, blue-eyed, in others they have olive skin, in some they’re Asian, with Chinese costumes and Japanese architecture. Some books feature detailed black and white engravings, some feature the 3-color process, and others are full of wild neon colors. I love them all. Each illustration tells multiple stories – the Arabian Nights story, the artist’s story, and world perception at the time of the work’s creation.

If I’m lucky, each book tells a story, too. Many have inscriptions on the inside cover. Some are filled in with childish scrawl, but more than one was given as a gift. One of the books in my collection was given on the occasion of a first communion. Another proud owner had won a spelling bee. Some belonged in school libraries, or were given as birthday presents. I do hope they got as much enjoyment out of the images as I have.

For more on Arabian Nights‘ illustrators, visit this nice article from The Guardian.

If you’re not familiar with the complexities surrounding the discovery, translation/interpretation, and historical importance of The Arabian Nights, the Wikipedia article is a good start. Be warned, you might not want to stop there!