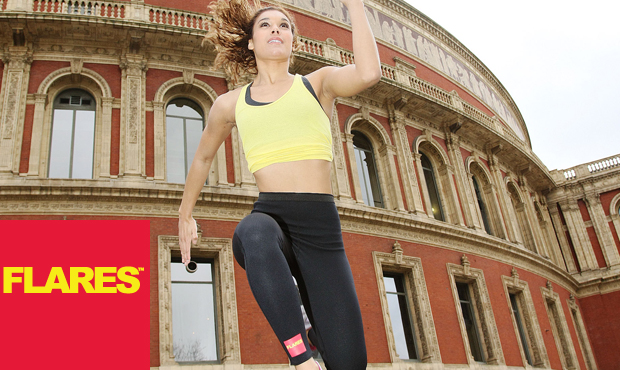 My new Zaggora flares finally made the trip across the Atlantic to land on my desk at work! Now I guess it’s time to start the Zaggora 2 Week Challenge. If you guys have been reading my blog, you’ll know that I’ve been obsessed with these miracle pants for awhile. I’m not sure what to believe – are they the real deal, will they really help me burn calories? Or are they too good to be true, just another kind of sauna pants like anything else you’d find on the “As Seen on TV” aisle at Wal-mart? I’ve seen some good reviews from women who swear by their Zaggoras, but I can’t help but wonder if it’s really just that they happened to start dieting and exercising as part of the 2 Week Challenge, and all their hard work has paid off. Either way, I guess the only way I’m going to be able to know for sure is to try them out. Buying these pants was my reward for reaching my first weight loss goal on my road to losing 20 lbs.

I actually wore the pants for awhile on Thursday night and last night, so I can tell you a little about my experience thus far. First off, though, let’s record my stats as of last night, so we’ll be able to watch as the inches melt off (or don’t). The pants cover the entirety of my belly, landing on my natural waist (which is pretty high), and go all the way down to my ankles, so I’m going to watch all of these areas for improvement.

My initial reaction to opening up the mailing envelope and seeing the pants for the first time is that they were pretty much exactly what I’d anticipated. They’re made of a very thick, somewhat rubbery fabric that looks a lot like a diving suit. They smelled a little chemically at first. The outside color was black, and the entire inside of the pants was bright yellow. The only thing I didn’t expect was for the waistband to be an unfinished elastic band. I wondered if it was going to chafe when I wore the pants for a long time.

It took a little time and effort to put the pants on the first time, and I was a little irritated at that, since my back was giving me trouble the entire time I was fighting to get the pants on over my heels. It’s important not to just put your feet in and try to pull the pants up – it’s surprisingly more like putting on a pair of pantyhose, where you have to get the ankles into the right place, then work your way up, pulling little handfuls to get the pants situated correctly on the legs before yanking at the waistband. Even after you work with them a bit, you might find you still have some extra room in the crotch area. I slept in the pants on Thursday night, and the only thing about them that bothered me was this crotch area, which chafed my inner thighs. I ended up using Bodyglide anti-chafing stick on the insides of my thighs, then working the pants into a slightly snugger position in that area. I was able to wear the pants for almost 6 hours of sleep before starting to feel too constricted, then I took them off to sleep the rest of the night. I hadn’t sweated much at all, but I did notice that my legs were very soft.

Yesterday I got home from yoga class and took a shower, putting the pants on afterwards to lounge around the house and then sleep in. I was able to wear them for about 6 hours again before they got on my nerves and I had to take them off. They’re surprisingly comfy just to sit around and watch TV/do your nails/whatever, and I like the way they look on me – I feel very svelte wearing them. The big downside of wearing them in your waking hours is the ‘swishing’ noise they make as your thighs brush each other. It’s pretty loud; The Man actually asked me to stop walking around so much while he was trying to think, lol! I would never attempt to wear these pants outside of the house, based on the amount of noise they make. Zaggora recently came out with a new version of the pants that are supposed to be much lighter/thinner, so I wonder if they make less noise, too. Again after taking them off last night, I found my legs to be very soft, though I hadn’t sweated that much. As far as I’m concerned, I sweat so much during Bikram class that it’s not that big of a deal to sweat while wearing magic pants, though, so no big deal.

I’m going to continue sleeping in them and wearing them around the house for the next two weeks. Once I’ve done all of my Bikram doubles to make up for lost time, I’ll actually be expanding my workout routine to include training to run a half-marathon and doing an at-home dance video a couple of times a week. I’ll probably dance in the Zaggoras, and maybe I’ll end up trying them out on a run once it gets a little cooler out and my thighs get used to the friction.

One thought on “Starting The Zaggora Two Week Challenge”