A huge glass sculpture in a Murano piazza.

This is an entry from the Vacation Archives, a somewhat tardy report of my adventures in Croatia and Italy. On June 4th, 2012, I spent the day exploring Murano and Burano, two of the islands in the Venice lagoon. Both islands are famous for artisanship, with Murano being the historic home of fine glassmaking, and Burano (once) boasting some of the finest lace in Europe.

So my plans from last night fell prey to laziness and a poor sense of geography. Overall though, I had a lovely day.

I woke up very late this morning, and didn’t leave the hotel until 12:30. It was raining, so I took an umbrella and set out to catch the water bus to Burano. When I got to the bus station, I found that there was no direct bus line to Burano, and that I’d have to go to Murano first. I caught the bus, and loved every second of the trip to Murano.

All day long, the first thing on my mind has been that I’m incredibly lucky. At some point I realized that I’m not lucky, exactly, or at least not in the way I had thought. I’m actually just a cool person, with a vision for who I want to be, and travel is just something I do to be me. In other words, I guess I’m saying that I’ve worked at getting to be the girl who sees the world. It didn’t just fall into my lap, by any means. It feels good to realize that I’m kind of awesome.

Anyway, it rained all day as I ducked in and out of glass stores and the museum of glass. I saw some gorgeous, sparking, delicate jewels, things that I had no clue humans could make. Some of the things in the museum were from the first century AD, and were much more delicate and sweet than any modern pieces I’ve seen.

I also bought myself two handmade necklaces, one simple and modern, the other elaborate and a little ethnic. The first necklace was in a little shop owned by the artist, and lots of his pieces are a beautiful matte finish. I ended up buying a large, faceted green bead on a waxed cord. The other necklace is crazy, with one huge central pendant that was created by a local artist who immigrated from Japan and incorporates Asian techniques in her work. It’s a very detailed pendant, and then the necklace itself features more beads tied in place, and a leather piece that hangs under the pendant, with even more beads dangling from that. It’s more ornate than my typical taste, but I loved it at first sight.  In addition, I bought a necklace for The Man’s mom with Murano glass and Swarovski crystals (she loves bling) and some tiny, delicate glass pigs and swans for my own mom. Oh and a tiny owl for me. It was only 3 Euros, and so cute, though what I’ll do with another owl, no clue.

When it was raining hardest, I stopped into a restaurant called Trattoria ai Frati for a bite to eat. I sat outside along the canal, and the canopy kept me dry, though not warm. I started with a fresh octopus salad, then had spaghetti with clams. I ordered the local wine, and was surprised that 7euro bought my own 1/2 liter bottle of an unmarked white wine, very fruity with a little oak on the back end and a buttery mouthfeel. I guess i should note that really I was more surprised at how big 1/2 liters is, being be typical stupid American. 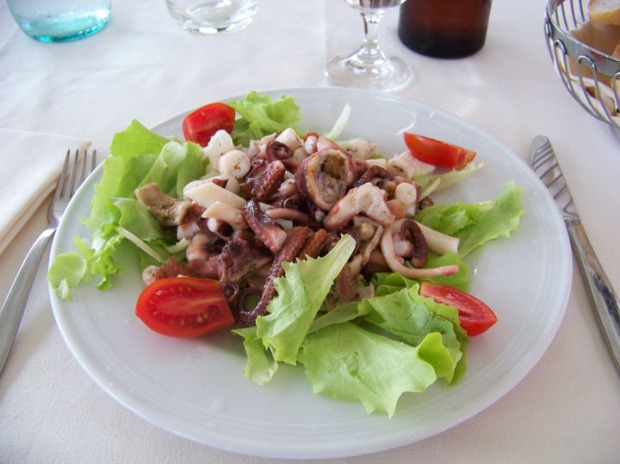 The octopus was wonderful, no seasonings to overpower the flavor of the meat. I was surprised at how succulent it was, and ate every last tentacle. As for the pasta, I don’t recall ever having so simple a dish that I enjoyed so much. The sauce was clam juice, white wine, a little olive oil, and basil. I couldn’t taste any other herbs, and there was no garlic, or if there was they did something magical to it since I didn’t get sick (I’m allergic). 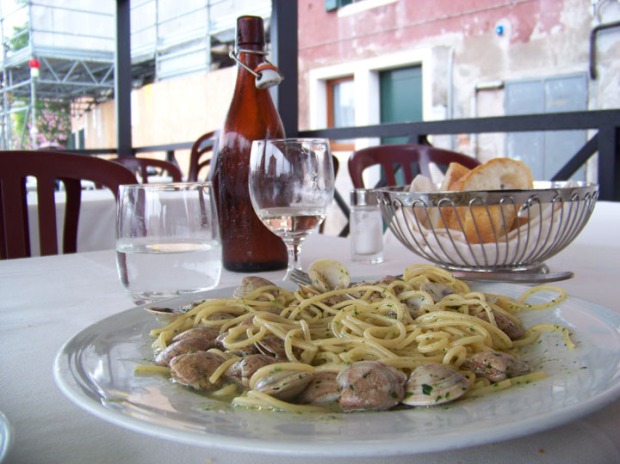 I was so happy throughout the meal, and while I was finishing up, this tiny, very bold sparrow flew down, perched on my plate, and ate a noodle! I guess it could tell I was amused, or else it was used to getting its way, so it came back a few times to snatch more noodles and some bread crumbs. I couldn’t believe how much it was able to eat.

After lunch I tried to get to the ferry to Burano, where I planned to visit Trattoria di Domani, a restaurant Anthony Bourdain talked about on one of his shows. Through a series of mistakes and a side trip to the Basilica dei Santa Maria e Donato, where I saw the mummified remains of Danieli Urgispache, I ended up on the other side of the island, and it was after 6:45 by the time I got on the ferry. By the time I ended up in Burano, dinner service was closed, and only drinks were being served at pretty much every place on the island, from what I could tell. I walked around a bit, consumed with the quaint beauty of the local houses, neatly painted every perceivable shade. Many had window boxes with little flowers in bloom, and there were handsome cats everywhere. Most doorways had curtains of fabric or beads hung in front of the actual door. I’ll have to look that up when I get home.

Burano’s candy-colored houses line one of their canals.

Now I’m on my way back to Venice. I believe I’ll look for a new restaurant for my dinner, maybe in a different neighborhood than where I’m staying. Then I’m going to look for a show of some sort. Maybe there’s a play or a rock show or something memorable.

Tomorrow morning I’ll be checking out early and heading back to the train station, then on to Perugia!