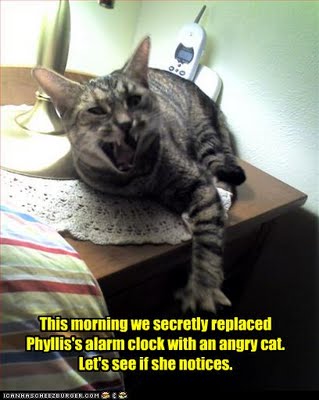 Sleep is a big issue for me. I don’t sleep incredibly deeply – probably wake up between 3 and 4 times a night on average to go to the bathroom, drink a glass of water, shift around in bed to escape The Man’s flying elbows (seriously, I got elbowed in the eye a few nights ago), kick the cats off of my feet, investigate strange noises, turn the fan on or off, etc. What’s weird is that I’m OK with all of this. I’m not overly tired when I finally do get out of bed in the morning, especially if the night included a few perambulations. Instead, it’s those nights that I sleep deeply and without stirring that leave me feeling haggard and worn down for a day or two after. No clue what that means.

As weird as it is to be a light sleeper with an active nighttime routine, the thing that really bothers me about sleep is that I seem to be addicted to it. Love snuggling in the blankets, getting my pillow plumped just so, breathing in Isabel’s sweet kitty smell as she curls up in the crook of my chin, dreaming long, incredibly detailed dreams – everything. Everything, that is, except the getting out of bed part. I have yet to figure out how to wake up and actually get out of the bed.

Let me reiterate that my inability to leave the covers has nothing whatsoever to do with being tired. In fact, I regularly wake up when my alarm rings, feeling chipper and well rested. Sometimes I even walk around the house for a few minutes, thinking about just why it was that I thought I should leave the comfort of my dreams so very early in the morning. Every now and then, I even get as far as getting dressed. However, inevitably I am unable to think of a logical reason to not sleep a few hours more. Sometimes I put my PJ’s back on. Most of the time I just crawl into bed fully dressed, and enjoy a couple more hours of dreaming.

I still live a pretty full life, of course. My sleep habits aren’t eating into my time so much that it affects my work or relationships with others. What they do affect is my ability to get as much done on my personal time, like exercising, writing a book, working a second job. Those three hours I desperately need to be awake and kicking for in the morning are the three hours that could make a real difference in the way I get things done. My exercise could be done for the day by 7am, clearing the way for an hour or two of work or recreational writing. So what do I need to do to get out of bed?

I read through Geek Dad’s 1o Geeky Tricks for Getting Out of Bed in the Morning. Great tips, but no dice. I do go to bed when I’m tired, around 11pm. I work at home, so no need to plan clothing choices. Don’t have a programmable coffee maker. I set my alarm across the room, and it does no good whatsoever (I also have two alarms, thanks to The Man, both of which wake me up fully but fail to give me a reason to stay awake). With two cats, putting a glass of water out unattended is a horrible mistake, and the reason that I want to wake up is to do something exciting & active (exercise) and spend time thinking & writing. Obviously what I’m missing has nothing to do with physical response to waking, but rather mental response to staying awake.

WikiHow has a cool article on How to Wake Up on Time, and some of the tips there were pretty good, especially the idea of taking a shower first thing, and also getting the blood pumping immediately by doing some calisthenics. Then I ran across this article on PopSci.com that was the first intelligent bit I’ve seen – it says to set your alarm back 15 minutes every day in order to get to the time you have in mind for waking up, then keep to it every single day, including weekends and holidays. Sounds awful, but at least it makes sense. The last article I ran across is definitely something I would not try, but it’s pretty darn funny, especially if you’re extremely lazy (check) and a stay-at-home tech person of any kind. Can’t say I’d like to wake myself up to stand up comedy routines and crackers in bed, but hey, we all have our quirks 🙂

For now I guess I’ll just keep trying, with some small changes – a definite bedtime, a sleep schedule set in a multiple of 90 minutes (due to sleep cycles), jumping jacks first thing, followed by a quick shower, then the rest of the day. After that, guess we’ll just have to see.