Baby me, circa 1983. My mum's legs appear in the background - I'd know those lovely ankles anywhere.

For most of my life, I never thought to ask “Who am I?”  I felt pretty secure in my identity: a 10th generation North Carolinian, daughter of two fiercely strong-willed people, lover of nature and history.

My father grew up in the same small town where I was born, and he and my mother will most likely live out their lives there on the North Carolina coast.  His family history is long and rather homogenous – mostly of English and Scottish descent, with some Native American (Algonquian, Cherokee, and a tribe from the American West) thrown in for good measure.  His father, my Grandaddy, had a jolly, strong-boned face, with large hazel eyes and dark hair.  He was a very handsome man in his youth, and in my memory he still holds the prize for most handsome man I’ve ever met.  He and my maternal grandmother, my Nana, made a striking couple in their youth.  My Nana was a natural platinum blonde (no longer), and has beautiful blue eyes and a large-ish Norman nose.  I have the same strong nose, and cheekbones my father says come from a generation before my grandmother.  I’m also lucky enough to have a figure much like the women on my father’s side – tall with wide shoulders like my Algonquian ancestors, with a small waist (it’s filling out as I age), large, full hips, and sadly, even the same huge feet.

The rest of my facial features, movements, and characteristics favor my mother, who is more of a mutt.  Her father, an orphan, grew up in Nebraska during the Great Depression.  He was lucky enough to live with cousins, and knows some of his family history, but doesn’t share.  I know that one of his grandfathers was from Maine, and married a Native American woman from a tribe there.  Grandpa has strong cheekbones, dark, almond-shaped eyes, once had jet-black hair, and looks vaguely Asian.  It makes me wonder if there was more than one Native American in his bloodline.  My Grandma, his wife, is tiny and stout, though the roundness happened later in life.  She’s much shorter than I am, coming up to just under shoulder height on me.  My face, which is my mother’s face save for the nose and higher cheekbones, also strongly resembles my Grandma’s.  She has dark, rather small eyes, dark hair, a large nose, and a swarthy complexion.  I’m making her sound unattractive, but that’s not true – she was very pretty in her youth, just like my Mum.  However, of all of my relatives, she is the one who somehow strikes me as most different, most exotic.  I suppose that’s because I don’t know where she’s from. 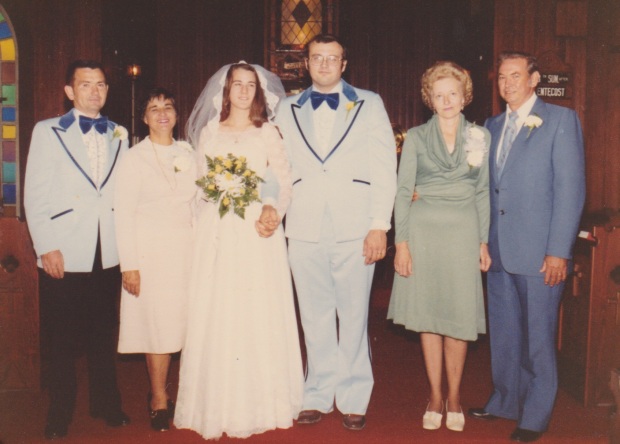 My parents' wedding, October 4th, 1977. Is it me, or are my parents the only genuinely happy people in this photograph?

Well, that’s a half-truth.  I know where she’s from – Queens, NY.  I know that she had two brothers, a mother who indulged my own mother’s love of the absurd (and tea-time), and a father who sailed a houseboat back and forth from New York to Florida.  That father was a heavy drinker, and though the few stories I’ve heard of Grandma’s childhood sound pleasant enough, one gets the feeling that life was not exactly idyllic.  So who were these people, this mother and father?  Where did they come from?  I know that Miriam, my great-grandmother (my grandmother’s mother) had family (The Lighters) who came to America from Barbados, through New Orleans.  Odd coincidence, eh?  Also, one of these ancestors carved a door for a church here in the city, though my mother was unable to find it on her last trip here.  I believe that they were English in descent.  In addition, I know that part of my Grandma’s family came from Prague, though I don’t know in what year, so I don’t know what country they were from, as Prague has historically changed hands a few times.  I was told once that all of my family in Europe was dead after WWII, which led me to conclude that they were either a small family, culled out by misfortune, or else they were Jewish, or maybe Roma.  Maybe someone knows, but no one’s telling.

It probably shouldn’t bother me that much, and in many ways it’s just fine for me to let things continue to be mysterious.  However, I feel compelled, almost obsessed to know more, like I’ll never be truly whole until I do.  Maybe that’s because I know two more important things about myself that have very much to do with the stock that I come from.  The first is that my heart longs for me to become a shaman, to speak with the spirits of my ancestors and the spirits of nature, and help bring healing energy to the world.  I have felt this call since childhood, and have only recently learned to listen closely enough to understand.  I don’t know if this path is carved out for me because I have Native American blood, or if I’m just spiritually more aware as a result of the beautiful chemicals God has mixed us out of, but perhaps it’s a bit of both.  The other important fact is that music touches my soul quite deeply, plucking the strings of my heart, enriching my being in so many wondrous ways that it’s difficult to put it into words without sounding disingenuous.  Music is God’s way of pushing me to the correct spiritual path, and forming the right relationships in my everyday life.  In particular, Eastern European music has always had a strong pull, ever since I was a child.  What does all of this mean?  Probably nothing.  Maybe everything.  Maybe it’s up for me to draw my own conclusions, just as I’ve had to do with every other sign regarding my possible genetic makeup.

Or possibly, it’s time for me to find out who I am.  I recently discovered DNA Tribes, a website and DNA testing company that allows normal people like you and me to test our DNA and find out the particulars of our makeup.  You simply swab the inside of your cheek, send it off, and they’ll tell you what ethnic groups around the world bear genetic markers that are most similar to your own.  They’ll also tell you where the highest concentrations of other people bearing your same genetic traits live.  It sounds a little 1984-ish, but I’m sold.  I’ve decided that as soon as I have the money, I’m getting tested.  It’s funny, I guess now as I read back over this that I’m treating this like an STD test or something, but it’s true – I won’t be able to rest until I KNOW, really know who I am.

Me in Vienna, Austria in November of 2004, wearing my favorite hat, my Nana's nose, my Mum's pressed-lip smile, and my Dad's eyes.

What do you think?  Do you know all about your family history?  Do you want to know?  Do you wish you didn’t, or that you were something other than what you are?  I’m interested to hear your story.

4 thoughts on “Finding Myself”