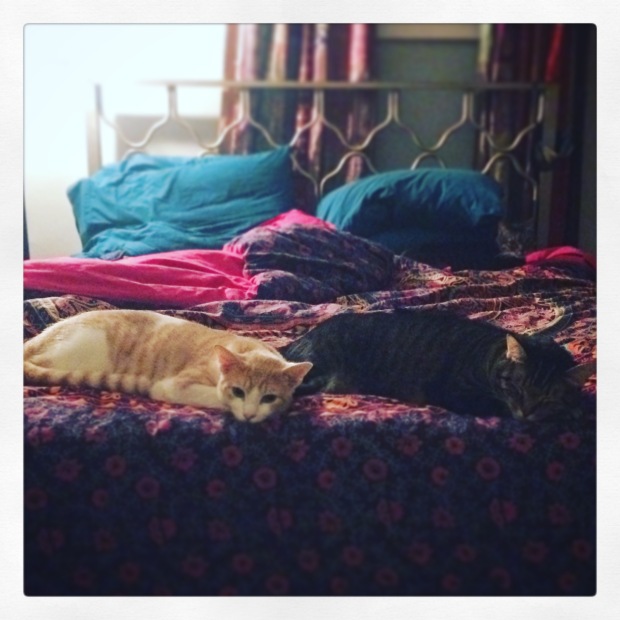 The Cabal (Izzy at back right, Charlie at front left, and Munky – playing all sweet and innocent, but don’t be fooled – at the front right)

I didn’t sleep very well last night. To begin with, I had trouble falling asleep, and then Munky kept waking me up all night. He’s always been a needy cat, but now that he’s on kitty Xanax for the UTI he’s even worse. It’s not exactly clingy-ness that I hate; it’s something more in his general behavior that’s always worked my nerves. And what makes it worse is that, though he’s a total jerk, he does it with this air of complete innocence that everyone eats up with a spoon. I don’t know anyone who doesn’t adore this damn cat, other than myself. Of course, I know that he’s a manipulative bastard, and you’re all being duped!

When Charlie plops down over my legs at night, he does it with the exact same attitude that he does in settling down beside either of the other two cats in the house. He’s relaxed and comfortable with me, and basically treating me like another cat. There’s a similar thing with Isabel – she has a specific place that she likes to curl up, right about hip level, and I toss my arm over her. She purrs deeply, and cuddles all night, obviously happy to be close. Both cats respond to my need to turn over/change positions throughout the night, and either go right back to sleep, or move away to sleep elsewhere. Similarly, they spend their days doing cat things, marching to their own drums, living lives that might include me but don’t HAVE to (other than the basics, like cleaning the litter and giving them food).

Munky, on the other hand, EXPECTS things. He follows me around with these big, dumb, sad eyes, kind of like a dog, but less endearing. Sometimes, if you watch him carefully, just for a second or so he’ll drop the act, and you can see the gears turning as he decides how to best mold you to his will. It’s insidious! I can’t go into the bathroom without him jumping up on the toilet to be petted. A trip to the kitchen warrants a volley of pitiful mews – he’s always in search of kibble, no matter how much he just ate. At night, once I lie down in bed, he likes to climb onto my torso (he’s big, so he takes up all the way from bladder to lungs, and weighs me down like a fuzzy, somewhat pliable cinderblock). He gets comfortable in this expectant way, his ankles angling into my bladder, and when I try to move, his body language fights it. He’s been known to dig in claws as I shift, but also follows that up with a seemingly genuinely mystified expression that says, “Oh, did that hurt? I didn’t even realize you were there!” And I’m not allowed to get truly angry, because he’s like a child, right? But really, it’s like some weird form of emotional abuse. He also likes to reach out and pet me on the face throughout the night – claws lightly extended. Sometimes if I don’t react, he gently hooks his claws onto my bottom lip just to see if I’m actually awake. Most of the time, his aim is to get petted, but sometimes he’s also looking for food. Last night he was lucky he avoided a firm boot to the ass after he woke me up about 10 minutes after I’d FINALLY fallen asleep. I had to put a pillow on my chest to keep him from finding a way to lie down on top of me after I’d put him off of the bed a couple of times. Ugh.

The thing is, I could probably ask my ex to take him. But Munky would be lost without Izzy, and Charlie would be lost without Munky (and Isabel really doesn’t give a care about either of them – god, I love that cat). Really, though, it’s not that bad. He’s not a holy terror. He doesn’t bite or scratch or destroy things, he doesn’t pee where he’s not supposed to, or really do much other than play fight with Charlie, ask for food and brushings, and sit on people. And most of the time, I’m not even that annoyed. But here he goes as I type, sitting across the room, staring at me with those soulless, calculating eyes, like some demented, extra-cute teddy bear/cat hybrid, puzzling out how to work me into giving him extra kibble before bed.

Let’s face it, cats are just the worst, and being a cat lady is its own special kind of crazy. Who else would put up with this crap?