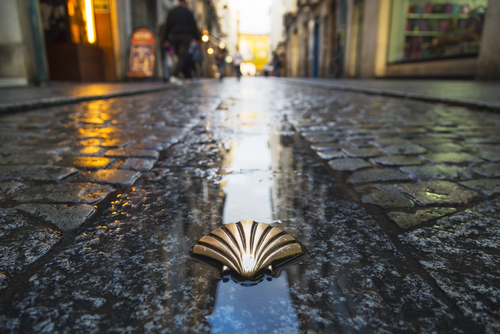 Today’s Daily Post prompt is pretty interesting. It also happens to intersect perfectly with the Camino-related topic that has been weighing heavily on my thoughts for the last few days. The prompt asks us to discuss the person in our inner circle of friends/relatives who is most unlike us, and what we think makes it possible for us to get along.

For me, the answer is pretty simple, since one of my best friends in the world is pretty much my polar opposite. Rachelle and I met during our freshman year of college. She lived in the room across the hall, which she had to herself for most of the year after her roommate quit school a month or two into the first semester. Behaviorally, Chelle was (and is) about as different from me as someone can get – extroverted, loud, outspoken, and somewhat argumentative. OK, really argumentative, but only in a fair way. Do NOT say something stupid around her, unless you feel like getting verbally eviscerated in the next five minutes or less.

Culturally, Chelle and I were from two different worlds. She was from the San Francisco Bay Area, and loved what I then deemed “fancy” food (sushi and complicated coffee drinks were top on the list). I’m from a tiny, hick town in North Carolina, and until I moved to New Orleans, the majority of my diet had been fried or out of a can, or both. She’s Jewish, and oldest of five kids. I’m pagan, and an only child. She did pretty terribly in high school, grade wise, but had excelled in extracurriculars and student government. I graduated seventh in my class, hid out in the yearbook classroom or AFJROTC class to avoid other kids, and was captain of the Quiz Bowl team from sophomore year until I graduated. She got an allowance, and I worked two jobs to put myself through school. When we first met, my first impression was of a bossy, privileged loudmouth. Luckily, we were both intrigued with how alien the other seemed to be.

After I got to know her a bit, I realized that half of the things I was a little wary of were actually awesome. I’m extremely introverted, but her extreme extroversion means that she can a) go out and make me friends without me having to do anything (win!), and b) not be offended if I’m not feeling that talkative. She’s not a soul sucker like a lot of extroverts, either – she has a great way of realizing when you’re overwhelmed and slowing down and moving at your pace, even though her pace is like a million miles an hour. She’s bossy, but she never tries to steer a conversation or outing without making sure that everyone’s happy, making her a great natural leader and planner. Plus, she’s always upbeat and positive, meaning we work really well together to come up with solutions to problems, since neither of us gives up (if you’ve ever watched Parks and Rec, you can just think of us as Leslie Knope and Ann Perkins). Chelle’s enthusiasm and global outlook got me introduced to a lot of new foods and ideas pretty early in my college career, which only helped to expand my horizons. She’s probably part of the reason that I got so into traveling. In turn, I helped introduce her to what life in the South was like. I can’t actually look at that as a positive, but it must have helped a bit since she’s now living in TN with a husband and a family of four (see, I said we were totally different).

So how does Rachelle fit into my Camino journey? First off, she’s one of my favorite people to talk to about spiritual stuff. She’s deeply interested in her religion, and enthusiastic to share, but she’s also really open-minded. Like me, she loves nothing more than a good chat about spiritual paths, whether that’s finding out about someone else’s religion, comparing practices, or discussing new ideas about how to lead more fulfilling spiritual lives. She’s very active in her synagogue, and often goes to dinner with her rabbi and his wife. I wish I could sit in on their debates, instead of waiting around to hear about them afterwards!

Additionally, one of the things that makes Rachelle such a great planner is her skill with budgeting (which is definitely not my strong point). She’s got two sets of twins, so she has to really make every penny count now, but really, she’s been great at stretching her cash since we met at 18. When it crossed my mind the other day that I should really start putting together a budget for my pilgrimage, one of my first thoughts was that I should try to channel Rachelle’s budgeting energy…but I’ll probably just call her up in a week or two and see if she has any pointers.

For right now, I’m doing what has traditionally helped me with budgeting for bills and paying of credit cards – starting with an Excel file. I’m going to price out all of the gear that I know I’ll need, plus plane tickets, food, auberges, emergency funds, and enough money to cover all of my bills back home while I’m away. Gee, that sounds scary already. Then, my next step will be setting up a goal in Mint.com, and figuring out how much I should be saving per month between now and then to reach my goal. Guess I should finally pick a travel date, huh?