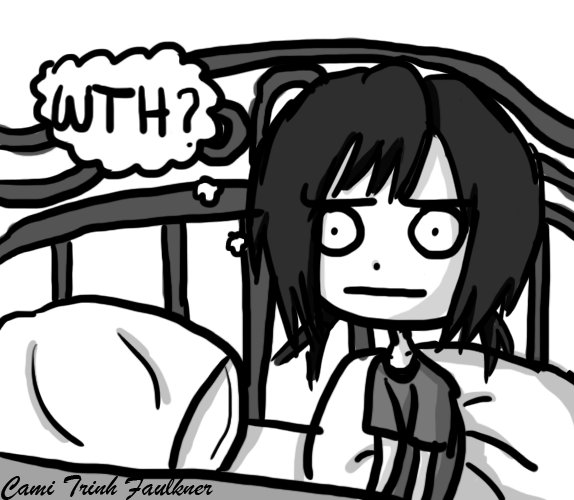 This may be the first time that I completely ignore the point of a Daily Post prompt and write something related but off-topic, instead. However, it seems odd that the prompt today would be to describe the last time you were moved to tears by something beautiful, and this morning was the first time in years that I was moved to tears by a dream. Even though the dream was not beautiful – it was sad, and cruel, and extremely strange – and I only remember a snippet of the entire thing, I still feel compelled to share it here.

The dream happened sometime this morning, probably around 8am, but definitely long before I was ready to get out of bed. I know that it was daylight out already because when the dream woke me up, I was wearing my sleeping mask, and it was soaked with teardrops. I lifted the mask to let more tears roll out, and saw that the sun was already strong in my room.

The dream was a conversation with my Nana, the wife of my dead grandfather, Granddaddy. It was a family gathering of sorts, and we were standing in a kitchen with a freestanding kitchen island between the two of us. She had her back to a large bay window. It’s a room that doesn’t belong to any house in my family, and I can’t remember having seen it before.

My mother was on my right side, and behind and around us were family members from my father’s side of the family. Other than my great-grandmother, Nana’s mother, who was somewhere near her (you know how you sometimes don’t see something in a dream, but you still know it’s there?), I don’t know who any of them were supposed to represent; they weren’t faces I know from real life. I just know that they were supposed to be related to Nana and my father, and it was some kind of family reunion or get-together to celebrate a holiday or happy situation.

I came to the gathering under rather benign circumstances, but the dream escalated pretty quickly. In real life, since dreams only take seconds, it might be that the dream was only the conversation, and everything else was backstory that my brain used to fill in the blanks. I dunno.

I was paying my respects to Nana, just a little ‘Hi, love you, glad to be here’ kind of thing, and she started to pick me apart. She started insulting me, and my life choices, and my intelligence. I don’t remember anything specific (except for one thing that I’ll get to in a second), but I remember her face was twisted with hatred and malice. It was frightening, and obvious that she didn’t love me at all, and never had. The only thing that I remember very clearly from what she was saying was that she was calling me a liar – for an answer that I’d written down on a test in undergrad. The test question was ridiculous, and definitely not real, but I remember it, so here it goes:

“Two WWII-era American submariners went missing, and were presumed drowned. Their bodies were later discovered at _____________.”

In college (in this weird alternate reality), I’d answered that they were found at the zoo (the flash of scenery that I get tells me that I meant the Lincoln Park Zoo, in Chicago). However, I got the answer wrong because I failed to calculate the age of the park in relation to when the two men had died. They were actually found at the Ice Capades stadium on the other side of town.

In the dream, Nana somehow knew that I had written the wrong answer on my long-ago test, and was making the assumption that writing the wrong answer when I’m typically a pretty smart girl meant that I was a despicable, no-account liar. I kept trying to explain that I just hadn’t known the right answer, but she wouldn’t take my explanation, and was calling me a liar to my face in front of this circle of people. It was humiliating, and I was so sad that she didn’t love me, and so angry that I couldn’t get her to realize that what she was doing was fundamentally incorrect.

So I woke myself up sobbing. And if that’s not worth a blog post, I don’t know what is.

If you’re hip on dream symbols, or want to share your own dreams, feel free to chime in in the comments section.

5 thoughts on “My Weirdest Dream In Quite Some Time”