There’s a lot going on in my life right now. So much stuff, in fact, that I can’t decide on just one blog post to write today. Since I don’t have that long before I need to leave for band practice, I figured it would be best to just dump some thoughts now and come back later to write something cohesive.

So here goes nothing…

1) It’s Monday, and I hate Mondays. It means that I have another four days to go before something similar to freedom comes my way. I’ll be chained to my couch for 9 straight hours each day, and no matter how much work I put in or lunchtime I miss, nothing I do will be good enough for my employer, since I’m working remotely and she equates my absence from her office with slacking off.

2) The Man is cooking a seafood stuffed chicken that he bought at the store. I’m starving, but still haven’t decided if I can eat something that dubious.

3) I watched Hellraiser I & Hellraiser II last night, and neither scared me. For once I was able to joke about a scary movie in bed with the lights off, and put The Man in a panic for a change. He threatened to hide under the bed and grab my ankles one night. That was NOT funny.

4) You know how big of an ingrate I am? The Man bought me sparkling water when he last went shopping, and because it was lemon instead of lime, every time I take a sip I grimace and wonder how he could have made such a mistake. Yeah, I can be a real jerk sometimes. 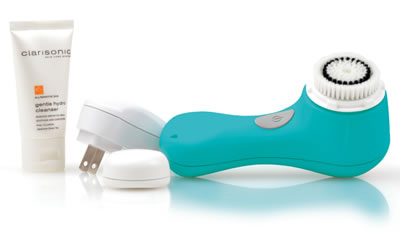 This is actually the color I bought, too. Love it!

5) I’ve been using a Clarisonic face brush for about a week and a half now, and though my laugh lines are still as bold as ever, my face has never felt so baby soft. I also started using StriVectin SD and Tightening Neck Cream, and the entire effort has really tightened up the skin on my neck and chin and also evened out my skin tone. 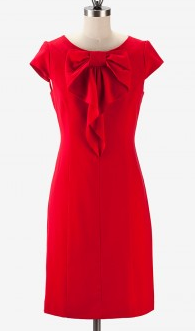 Sandra Darren Cap Sleeve Bow Dress, from Stage Stores - with a discount I found online, I got the dress & shipping for $29!

6) My new red dress came in the mail today and it’s SMOKING HOT and very nice quality for being ridiculously inexpensive. I’m going to get it tailored just to look a little trimmer for my friend’s wedding in April.

7) A little over a week ’til one of my best friends gets into town, and I’m so psyched to see her! Yesterday I went out to dinner with another old friend from college, her husband, and their two sets of twins (ages 4 and 1). I was expecting a headache, but the kids were absolutely amazing. It was cool seeing my friend again, too. It’s hard to think that we graduated college less than 10 years ago, and here she is with 4 kids, while I’m still dating, renting, and wondering if one more cat would be too much work. I wasn’t jealous at all, though. She was telling me about another friend of hers who IS jealous and makes kind of a big deal about it, and I just can’t wrap my head around what that must be like. I guess I’m just not the jealous type. Sometimes I want things, or wish my life could be different, but I never see anyone else having the things I want as anything other than a reason to be happy for their achievements (unless they’re jerks, in which case I don’t care about their achievements).

8) Is it weird to be proud of myself for not being too concerned with financial achievement? The Man gets a little down with me sometimes because we don’t have the same opinion of money. For him, money is the route to happiness, while for me the two are pretty much mutually exclusive (other than that money buys vacations and brie, both of which make me pretty darn happy). I want to make enough money to get myself out of debt, afford some nice things, and make my way around the globe a couple of times before I kick the bucket, but I can still think of plenty of ways to get enjoyment out of my day if my bank account isn’t full. I guess I just feel like there are so very many things to worry about if you really feel like it, and if you’re the kind of person who’s always looking for a storm cloud, it’s always going to perch directly over your head and start to pour. I’d much rather look for patches of sunshine, and do my best to enjoy getting wet if it comes down to it. There are some negative bits I’m having trouble ignoring, but overall I just want to do my best by people and myself, then enjoy the soul benefits of searching out smiles.

9) Band practice at 8! I’m pumped, even though I’m a bit worn out from this day and would really love to just have a drink instead of going back to ‘work’. However, there’s nothing like pouring my heart into the microphone, and the newest songs are lovely confections. Can’t wait to play our next gig and kick this band into overdrive. I love my guys!

10) It sounds like the sailing trip in Croatia might have been canceled due to one of the other guest’s personal situations. I’m bummed, but the wedding is still happening, and we might be taking a ferry from island to island, instead. That actually sounds more fun to me, plus it might give The Man an excuse to stay in Europe for a little longer and go to Pompeii with me. I’ve wanted to go to Pompeii since I was 10 or so, and it’s gonna happen this time!