My friends and I took a trip out to Abita Springs, Louisiana this past weekend for a tour of the Abita Brewery. Abita Springs is only about an hour’s drive from New Orleans, crossing over the massive Lake Pontchartrain by way of one of the world’s longest bridges, the Causeway. The town is built on the site of a Choctaw Indian settlement, and takes its name from the nearby medicinal springs. The town’s water source was once known for its healing properties and is still known for its great taste, so I guess it makes sense they’d want to use the spring water to create beer!

A group of five of us drove out to the brewery for an hour-long tour of the facility and the chance to try a selection of their beers. In New Orleans, Abita Amber is a staple at pretty much every bar. The brewery’s website describes Amber as a Munich-style lager with a smooth, malty, caramel flavor and a rich amber coloring. Along with Newcastle, Abita Amber tends to be my go-to beer choice when I’m out on the town. The brewery makes seven so-called “flagship” beers that they brew year-round, as well as a number of seasonal and varietal beers and their own root beer, made with Louisiana cane sugar.

The tour was pretty good, definitely enhanced by being free. When we arrived, we were given a plastic Abita cup. Those of us with open-toed shoes were handed plastic booties to don before entering the working brewery. The group was then shepherded into The Tasting Room, a large, bland bar room setting with lots of tables and chairs and a huge bar with only Abita beers on tap. We formed a line to go behind the bar and choose any beer that we liked to fill our cup, entering the bar area from one set of hip-high swinging doors, and exiting on the other side through another set of swinging doors. There were probably around 100 people getting beers, and the tour guide made announcements on a microphone during this time. We were shown a couple of short videos (click through to watch) about Abita Brewery’s history and how they’re going green by using recycled glass, etc.

After everyone had gotten a beer and had a minute to see the videos, we were led into The Cellar, the larger part of the brewery that had all of the equipment. It was much more industrial than I had thought it would be, with these incredible metal aging tanks that hold 600 kegs of beer. The tour was interesting, but the best part for me was getting to drink an incredibly fresh Abita Amber. The flavor of this beer was noticeably different at the source than when you order it at a bar. Part of that might have been that their lines were crystal clear, or maybe it was due to being a much younger batch than what makes it out to other places in the region. All I know is that it was definitely worth the drive to have a sip of a proper Abita Amber.

We were allowed to choose whatever beer we liked, and there were multiple returns to the bar for those who drank fast enough.

A lovely cup of Abita Amber.

The incredibly dashing plastic booties! I felt like I was in a forensics show… 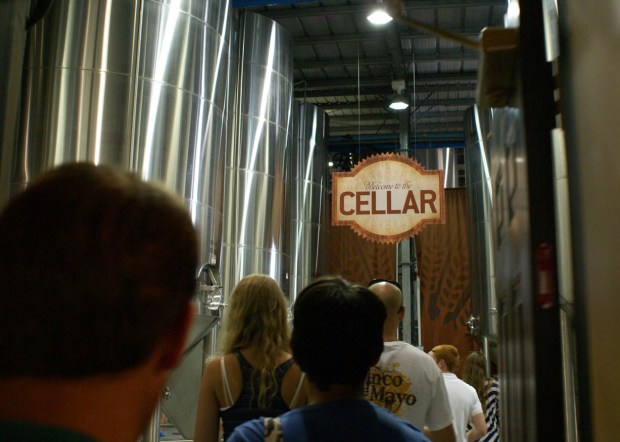 Entering the working brewery. Those tanks are massive! 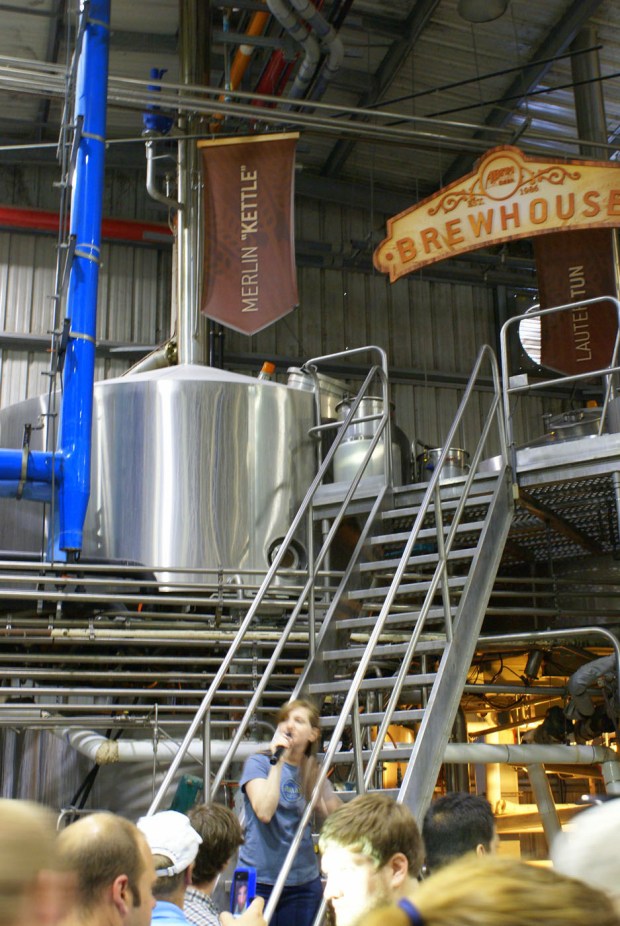 The tour guide explains the brewing process from her perch on the stairs.

A better view of some of the fermenting tanks at the brewery. Each of these holds up to 600 kegs-worth of beer at a time.