By the time Cardeñuela Riopico came into view, I was ready to drop from exhaustion. As I shuffled down the main street, I began to feel the melancholy seeping in through my aching spots. I’d managed to push it away all day, but now it was obvious I’d gone as far as I could, both mentally and physically. Whether or not I found the only friend I had left in this new Camino world, this would be my stopping point for the day.

The town was pretty small, and there were only three options for albergues, but I had no clue which one Natalie had chosen. By now it was bordering on late afternoon, and I wasn’t even sure if she had stopped in this town. I had no idea how far ahead of me she’d been. What if her plans had changed, and she’d called it quits in Atapuerca? What if she’d felt energized, and kept walking to Burgos? I knew that no matter what, I was done walking until tomorrow. My legs were in rough shape. I told myself that I would be OK if I couldn’t find my friend, but I didn’t believe it. I wasn’t ready to give her up just yet.

I walked all the way through town, and saw a few faces, but not one pilgrim. It occurred to me that perhaps Natalie had tried to send me a Facebook message with her location, so I stopped in at a local bar to use the wifi. Being my normal awkward self, I didn’t feel comfortable asking the bartender for the wifi password, so I ordered a beer and tried not to look conspicuous while glancing around for a sign with wifi password. Finally the bartender took pity on me and asked if I needed help. I took my chance, and in broken Spanish explained that I was looking for my friend, a girl wearing orange pants. Never had I been so happy that my high school Spanish teacher had taught us how to go clothes shopping en español. The bartender said she hadn’t seen anyone in orange pants, but picked up the phone and started to call around town for me to see if anyone else had. After a couple of calls, she let out a hoot – the girl in the orange pants had been spotted, and was staying at the first albergue in town! Now that I’m retelling this story, I realize that since I’ve returned from the Camino and started my new career in hospitality, I’ve held this woman in mind as a paragon of kindness and hospitality. She really saved me that night, just by making a few phone calls, even though she didn’t have to. Wherever she is now, I wish her many blessings, across the miles.

Shoelaces tightened, pack back on, poles in hands, feet one in front of the other, back through town, every step its own form of torture. Natalie was waiting at the front door for me, clearly relieved that I’d showed up in one piece, long overdue. She helped me get checked in with the hospitalera, who showed me my bunk and instructed me on the rules for where to take off shoes and what doors to keep locked, etc. The water wasn’t that hot in the bathrooms, but the shower pressure was good, the rooms were well-appointed, and even better, the albergue was nearly deserted. Ruth (the Anglican priest that had been in our room the night before) was here, and turned out to be a sweet, friendly person. We chatted for awhile, did laundry and hung it out on the line in the waning sunlight, then Nat and I went to see if the town church was open. It wasn’t, but we wandered around anyway, and I took some of my favorite photos of the entire trip. The sunlight was just so beautiful that afternoon. It put a cap on things. I knew it was our last day together, but instead of feeling sad or angry or lonely, I started to get excited for what was to come. 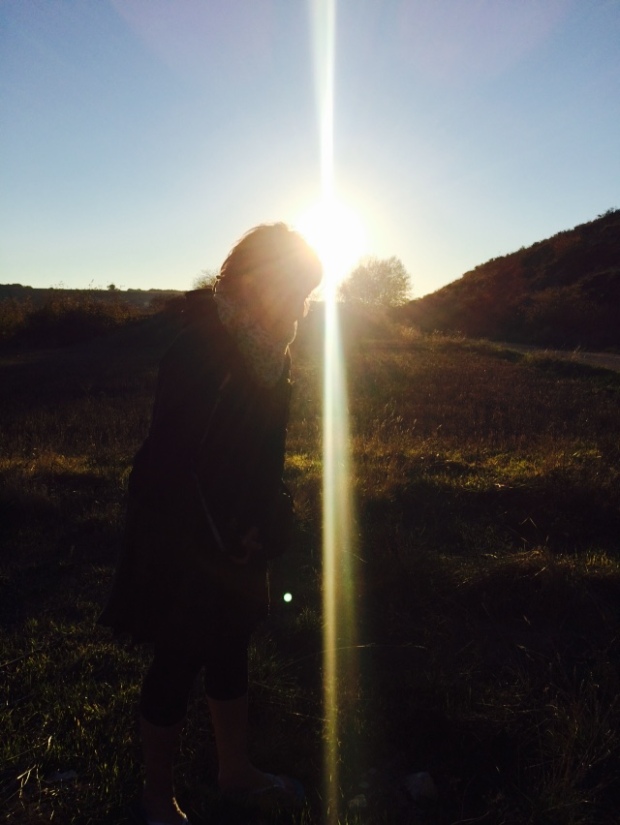 There were only four of us in attendance at dinner that evening: Natalie, myself, Ruth, and a fourth person whom I can’t seem to place. I had so much fun asking Ruth questions. I’d never met a female Christian religious leader. I’d met women with strong religious beliefs, and I’d met preacher’s wives, and I’m sure I must have seen a nun or two in passing, but I’ve never met a female preacher, and until then, definitely never a female priest. I had so many questions. Of course, since she was British, I also had all sorts of TV questions about the obvious things – like, had she watched Vicar of Dibley or Father Brown, for instance (the answer was yes to both, of course). I regret not having more time to get to know Ruth. It must be difficult to go on vacation as a spiritual servant, especially on something as personal as a pilgrimage. How can you ever really escape your job when the world is your work? I wish I could have asked her how she felt about that, and whether it was a burden or a joy, or a little of both.

Self portrait with fluffy eyebrows.

After dinner, I enjoyed luxuriating in the albergue bar in my most fetching ensemble of elephant pajamas, neon green compression socks, and hiking sandals, drinking pacharan with Natalie and Ruth while we chatted and caught up on our online posts via cell phone. We discussed our plans for the next day, and somewhere in there, I made my announcement.

I’d spent the entire day feeling anxious and frightened that my only walking companion would leave me, when in actuality, it was the opposite. That afternoon, it came to me that I would be the one doing the leaving – at least metaphorically speaking. I’d decided to take time off in Burgos. We’d been walking for over two weeks now, and I knew it was time for a real break, an actual bed in a private room, time for my legs to recover, and some time to explore a city I’d heard was quite beautiful.

As I was describing my intention, the tiny, scared part of me hoped that Natalie would want to stay, but the braver part of me knew that it was time to part ways. She had somewhere to be, even if I didn’t yet know the full story. Our time was up for now. Though this meant that the Claire/Natalie/Anna sisterhood was officially dissolved, the timing felt right. So I skimmed through the various Burgos hotels on the Wise Pilgrim app – truly indispensable as it is – and stumbled across Meson Del Cid, where I could get a private room for around 50 euros a night. That was far more expensive than any albergue, but also much more luxurious than anything I’d get for that price in the U.S.

Visions of bubble baths danced through my dreams that night. Burgos or bust!