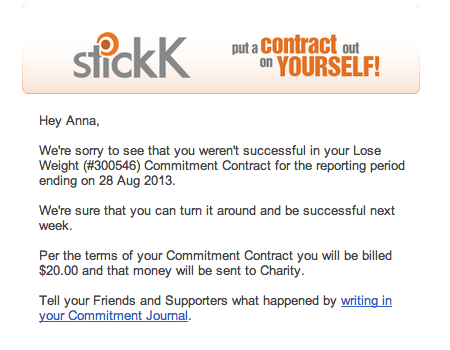 Contrary to what you see above, my $20 will not be going to charity. It will be going to an anti-charity that fights against LGBT equality, so that really sucks. But there was a point to doing it this way. I need to be pissed that my lack of effort has helped out the “enemy.” I’m not going to be angry at myself, because that defeats the purpose, but I will use my lack of enthusiasm for losing money to a bunch of gay-bashing bigots to try harder.

Last night I made this batch of cereal off of a recipe from Brendan Brazier’s Thrive nutrition plan, and even though I’m not really a cereal person and I also didn’t have apple juice to add to the recipe, it wasn’t too bad in the end. It’s full of nuts and seeds, neither of which are typical to my diet.

It’s now around 9:45 pm, and I’m about to go to bed – so very tired! But I’m taking that as a very good thing, because I was a very good girl today. Maybe it’s part of the detox. Here’s what my LoseIt page looks like as of the end of the day. Ignore the energy bar cookie entry under snacks; I made my own energy bars out of the Thrive recipes, and had one of those for my dessert. I had no idea that carob, macadamia nuts, sunflower seeds, bananas, dates, hemp seeds and jalapeno would go so well together! 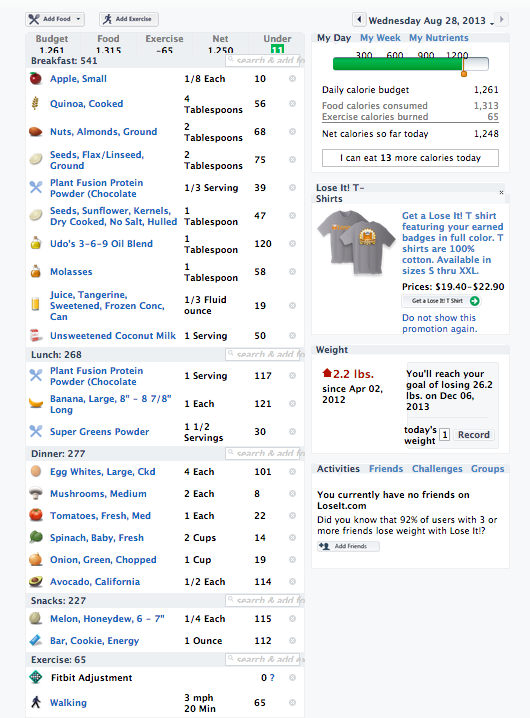